Prices achieved for homes in Perth were on average 8.7% (almost $50,000) higher for properties advertised in print and online, compared with houses and units advertised on digital channels only. Sydney homes were sold for an average $50,000 more when advertised on both mediums.

Houses across the country advertised on both mediums sold on average seven days faster compared with those only advertised online.

Print advertising also boosts the success of a sale. In Melbourne, 84% of homes advertised in print and online sold within their campaign period, compared with 63% for homes advertised online only. In other capital cities the difference is similarly dramatic with Sydney +11%, Brisbane +8% and Adelaide +6%.

“It’s no secret that Australians love property. On top of this, we know that the 1.8 million Australians who are likely to buy a property this year are heavy consumers of online and print news media, so it makes sense that real estate agents advertise across both mediums to achieve the best results for their clients,” The Newspaper Works chief executive officer Mark Hollands said.

“We are grateful to CoreLogic RP Data for sharing these findings with the industry which show how agents can best structure a campaign to maximise a sale price for the vendor.”

CoreLogic RP Data studied the sales history of 850,000 houses. Over a two-year period its analysts investigated where each property was advertised, its time on the market, the offer price and the value of the final deal.

Data from emmaTM (Enhanced Media Metrics Australia) found that of the 1.8 million likely property buyers, more than one million people read property content in print or online formats, and all buyers are more likely to read print than online content.

“This supports our findings: sellers who list their property in a print newspaper sell faster or they sell with a lower discount,” said Dickason.

emmaTM also found that when it comes to house hunting, buyers with an income of more than $100,000 are 33% more likely to read newspapers than the general population, and 74% of them use property content from news publishers.

CoreLogic RP Data’s findings for mainland state capital cities are contained in the table below: 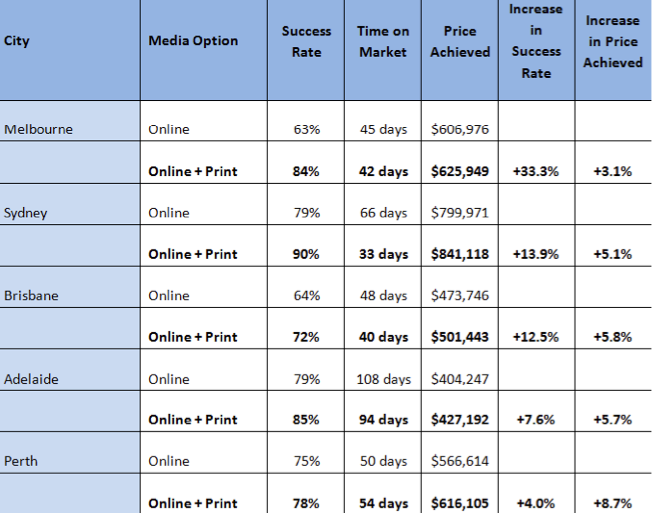