In this opinion piece, Atomic 212° programmatic and ad ops director Aline Eloy (pictured below) debates whether brands declaring paid-for social content creates a bright line that does not really exist. 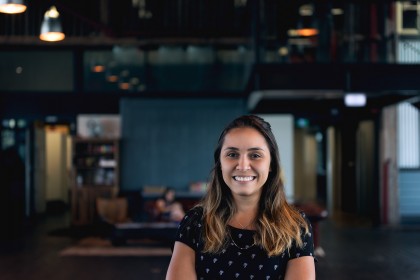 The Pope takes the suggestion to his Cardinals, saying to them, “There’s good news and bad news. The good news is McDonald’s want to pay us billions.

“The bad news is we’re going to have to end the deal with Wonder White.”

Paying influencers or platforms to promote a product or service has been around since the dawn of advertising, but from the 1999 cash for comment affair to, more recently, Tom Waterhouse appearing on Channel Nine’s live rugby league panels to ‘discuss the game’, it has always been something of a murky area.

Then, with the rise of influencers on social media, the murkiness virtually became opaque.

Who or what is an influencer, and what makes what they do a paid plug or piece of product placement as opposed to traditional content that just happens to feature a recognisable brand?

In an attempt to make things clearer, the Australian Association of National Advertisers (AANA) recently set out a four-page “best practice guideline” to clear up these issues, complete with 18 scenarios and the appropriate guideline that applies to each.

Perhaps the biggest change is that brands that pay influencers to promote them on social media, traditional media, native advertising and advertorials are now required to disclose this.

But does declaring paid-for content create a bright line which does not really exist?

Even ‘non-paid’ editorial content usually has a financial impetus behind it, because more often than not it has been pitched by a PR agency that has been paid by a marketing department. It’s the result of a planned marketing strategy.

It was particularly interesting that when it came to disclosing product placement on television shows, the AANA decided “there is a prevailing community view that audiences do not need to be notified of this sort of product placement.”

Apparently, audiences are smart enough to know when a TV show is practicing paid placement, but someone with a few thousand followers on Instagram is operating on a level of advertising sophistication well beyond that of an industry that’s been doing it for 60-plus years.

And, again, maybe that’s fair enough – there’s a level of product placement within TV and movies that’s basically just accepted. This is probably because you’ve been watching movies for long enough to spot them, and you’ll either appreciate it or you won’t.

Take the James Bond franchise, which is basically just one long ad. Agent 007 drives an Aston Martin, wears an Omega, and drinks… Heineken?

When Daniel Craig was spotted swigging from one of those famous green bottles in Skyfall, there was uproar, even though it occurred in an entirely organic fashion – a seriously shaken (not stirred) Bond sinking a cold one from his bed, in a one-room shack, on a remote island.

Never mind, it’s decidedly difficult to mix a cocktail in that situation, Bond drinks martinis! So, the internet went into meltdown, and the Dutch brewery was left reeling.

In fact, according to numbers from Front Row Analytics, the film saw “approximately $7.6 million of combined product placement branding exposure value… showings for its partners.”

Heineken forked out a reported $45 million for the placement, so just $7.6 million of branding is a disastrous return, particularly when you consider the amount has to be spread across other partners including Adidas, Aston Martin DB5, Audi, Omega and Sony.

As Lorraine Murphy, founder and managing director of The Remarkables, told us in our chat for The Lunchbox 2017, “Influencers needs to have a cap on how much branded content they do versus non-branded content, while also managing their audience’s expectations.

“They must also be very selective with the brands they work with, ensuring there is a fit and alignment between the brand and influencer. Audience trust will depend on this fit, and if breached, this will tarnish trust capital overnight.”

And that’s well worth considering when we discuss what should and shouldn’t be flagged as an #ad or #sp. If it’s good content that delivers a quality message that a given influencer’s audience want to engage with, should we really dilute its message?

Well, according to Murphy, not only is full disclosure important, if your content is strong enough, the fact that it’s sponsored shouldn’t make a difference.

“Disclosure is also key. Audiences don’t mind reading branded content – 53 per cent of consumers don’t actually differentiate the types of content according to our research,” she said.

“Simply put, audiences don’t mind if this is done well. However, they don’t like to be misled. Consider the value of the exchange – audiences will engage with branded content if they are getting something of value in exchange.”

Murphy’s stance on disclosure was particularly interesting, given our chat took place before the AANA’s directives were released.

There is of course an argument that the AANA is merely diluting the power of this form of content marketing at a time when ad blockers are making it increasingly difficult to achieve cut-through online.