Property website realestate.com.au has launched a video series showcasing the trials and tribulations of an epic demolition and transformation by interior stylist and well-known Instagrammer Catherine Hegarty.

The Heraghty family bulldozed their quaint weatherboard in Sydney to make way for a duplex, which will be the focus of the 2 in Twelve series, which you can view here.

Over 12 weeks, Heraghty (pictured above) and her team will design, build and fully furnish the two homes in two completely different styles. One will be the Heraghty’s forever home, the other an investment property, which is already listed on realestate.com.au. 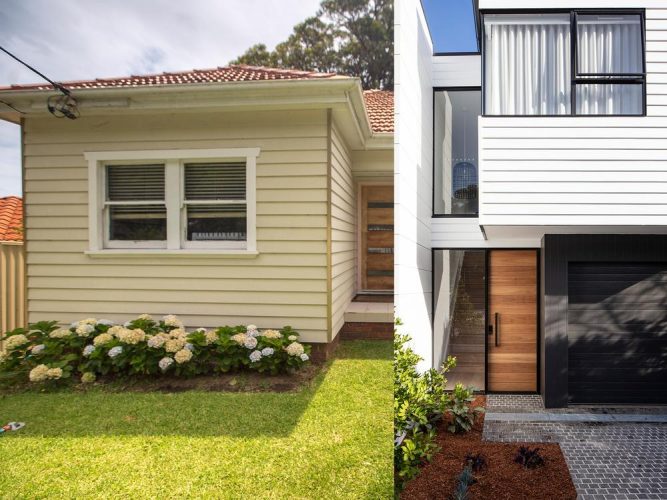 The before and after shots of the two homes

Each Monday, for eight weeks, a new episode will go live on realestate.com.au/Lifestyle. The series is presented by Mazda, with product integration from James Hardie.

“We did the sums and building a duplex is better financially than a renovation,” Heraghty said.

“You create two big homes, sell one, and pay off all of your build costs plus half your mortgage.”

Realestate.com.au and Visual Domain were on site filming the build over the entire 12 weeks. Neil Hipwell, director of FutureFlip, oversaw the team of tradies who had been challenged to build the two homes three times faster than standard construction times.

“Neil is going to do a great job but, because I do interiors for a living, I feel an enormous amount of pressure to get it right,” Heraghty said.

“I know a lot of people are going to be watching what I do.”

Monique Knoblanche, video and creative manager at realestate.com.au, said the series is the first of its kind by the property site.

“We know it will make compelling viewing – it’s an authentic and digital first video series about building the Australian dream, times two, and under extreme time pressure,” she said.

“We’re thrilled to bring it to our one million plus Australians who come to our site every day. Catherine will also have the eyes of her 140,000 plus Instagram community watching her every design decision.”