Famed men’s magazine Playboy in the US has unveiled its first edition since it decided on a new no-nude/bigger read policy. 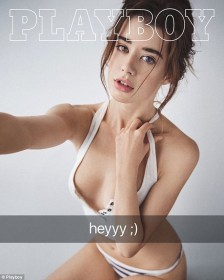 The March edition features 20-year-old American model Sarah McDaniel on the cover who shot to online stardom after posting raunchy images of herself on Instagram. Interestingly, McDaniel is famed for her “Heterochromia Iridum” or having two different coloured eyes.

The cover appears to show McDaniel taking a “selfie” and a cover line of “heyyy :)”- clearly a nod the publisher wants to take the title younger. The cover also comes sans any cover lines and appears to use fresh, modern fonts.

“The idea was to look at me from a boyfriend’s perspective,” McDaniel said in the accompanying interview.

Interestingly, the famed Playboy bunny logo is nowhere to be seen while the publisher has claimed it will no longer Photoshop its images either.

However, despite claims the title had dispensed with the nudes that had made it famous, the new edition reportedly shows models in a state of undress but with their hands strategically covering their vitals. 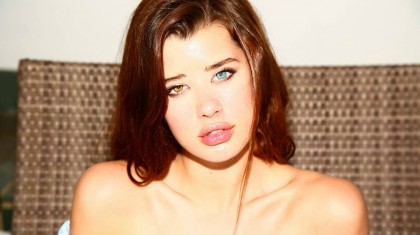 The magazine’s use of McDaniel as its re-launch cover girl appears an unabashed attempt to attract the Millennial reader. It’s pretty certain anyone over about the age of 30 would have little clue who she is. McDaniel reportedly has 250,000 followers on Instagram and that number’s likely to soar on her Playboy debut.

Last October the publisher decided to relaunch the title after sales and advertising plummeted. It’s new no-nude policy was meant to make the magazine safe to read at work, while it conceded if you wanted to look at nude women they weren’t hard to find with a simple click of a mouse.

At the time its CEO Scott Flanders said of nudity in Playboy. “That battle has been fought and won. You’re now one click away from every sex act imaginable for free. And so it’s just passé at this juncture.”