Advertise with us
Posted 6 December, 2019


A KFC ad in the UK has been banned by the Advertising Standards Authority (ASA) for sounding too much like a swear word.

The ad, which reads “What the cluck? £1.99 fill up lunch” received 40 complaints and has been banned by the ASA from appearing again after it was ruled the ad could cause “serious and widespread offence”.

It said “what the cluck” sounded too much like “what the f*ck”.

The ads originally appeared in The Sun and Metro newspapers and on bus stops. 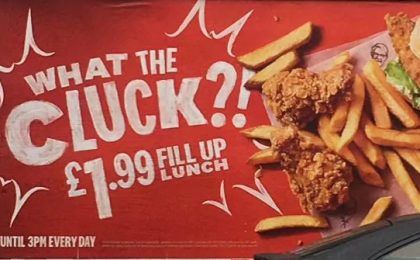 The ASA ruled the ad was “irresponsible” because the ads were placed where children could view them.

A news editor for a marketing publication told The Sun the ban will generate more internet than the “offensive” campaign.

“KFC will get more interest because of the ban than the original campaign,” the editor said.

Uncommon Creative Studio founder Nils Leonard said: “The KFC ad isn’t offensive. Not really. It’s a gag, and if it were a moment on morning TV we’d all chuckle a bit and move on.

“It’s cool to be offended now. But we’re getting mad at the wrong stuff.

“What’s offensive is being able to target people with false data to win elections or advertise drinks to children that contain unhealthy amounts of sugar. These are the things we should be really angry about.”

A KFC spokesperson said the fast-food chain was “disappointed” but “respected” the ASA’s ruling.

KFC isn’t one to shy away from a good pun. Last year, a similar KFC ad that was created after the fast-food chain ran out of chicken went viral.

The ad saw the KFC letters rearranged to read FCK followed by an apology letter to consumers. 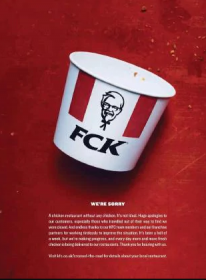