Streaming video on demand overlord Netflix is continuing its domination throughout Australia with Roy Morgan saying it’s now installed in one in ten homes around our fair nation.

Since its launch in March this year, Netflix has leaped up by at least 100,000 subscriptions each month, according to Roy Morgan.

Young singles and young couples take out first and second place for most subscribed to Netflix, however young parents and mid-life families aren’t far behind. 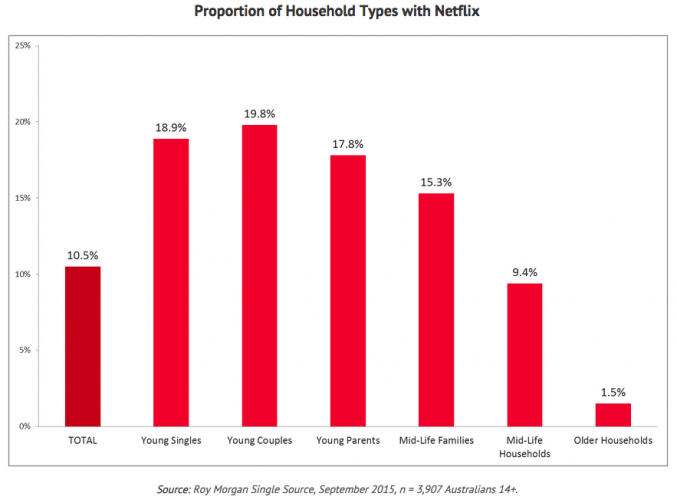 Many big streaming services in the market, Stan, Presto and Netflix, have teamed up with some of the big telcos.

The Sydney Morning Herald reported yesterday the telco wanted to use Netflix to ramp up broadband sales during the Christmas period.

“With Telstra TV imminent and TPG becoming Australia’s second-biggest internet service provider with its takeover of iiNet, Optus is clearly hoping its partnership of Netflix will give it a boost in the broadband market,” said Tim Martin, general manager of media at Roy Morgan.

Martin added: “Netflix service adoption in households continues to grow at a rate in the double digits month to month. These latest September figures show the number of subscriptions up 13 per cent (over 113,000 more homes) since August, which was up 16 per cent from July.