The cost per thousand impressions of a pre-roll ad on a mobile device – a video ad with a standard functionality such as click-through – is down 10 per cent year on year. And the completion rates of these ads – when the ad is actually watched all the way to the end – is apparently on the rise. At least, that’s according to the latest analysis from programmatic company TubeMogul.

The company has just released its fourth quarter results from the market, which looked at a bunch of TubeMogul executed campaigns throughout the past year.

The cost of pre-roll ads on desktop are down 11 per cent year on year, however pre-roll prices on connected TVs are up 36 per cent. 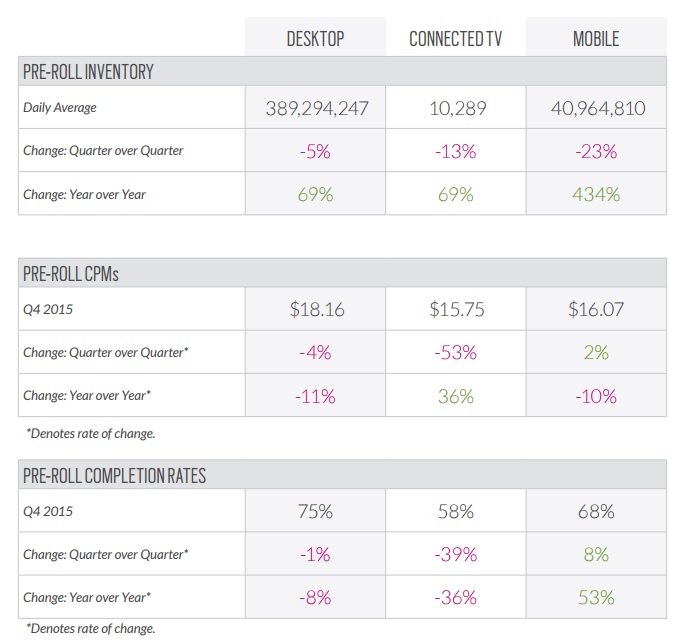 “Advertisers are rapidly catching up with changing viewership patterns, buying more mobile inventory and seeing better completion rates – from 51 per cent to 68 per cent completion rates over the past year alone,” said Taylor Schreiner, vice president of research at TubeMogul.

The completion rate on desktop and connected TVs for video pre-roll ads however have slipped down eight and 36 per cent respectively year on year.

Unsurprisingly – as everything is moving towards mobile – the company also found mobile inventory is up 400 per cent year on year, and advertisers are using more 30 second ads than they were before.

Last year, the amount 15 second ads showed on mobile devices was at 60 per cent, however TubeMogul suggests 30 second ads are up to a 41 per cent penetration mark – meaning 15 second ad impressions have slipped down a per cent.