In an search engine optimisation (SEO) driven world that is the digital realm at the moment, Edge senior sub editor Helen Eva takes a look at one of the great publishing devices that may be heading for extinction.

By anyone’s standards, former New York Post managing editor Vincent A. Musetto was a kooky cat. Always dressed in black and reputedly prone to explosive rants when deadlines loomed, the man affectionately known as ‘VA’ died in early June at the age of 74.

Aside from his incisive editing skills and quirky sense of humour, VA will long be remembered for one of the most famous front-page headlines in newspaper history – ‘Headless Body in Topless Bar’ – which not only succinctly summed up a gruesome murder in a seedy Queens joint but was subsequently used on T-shirts and for the title of a movie. 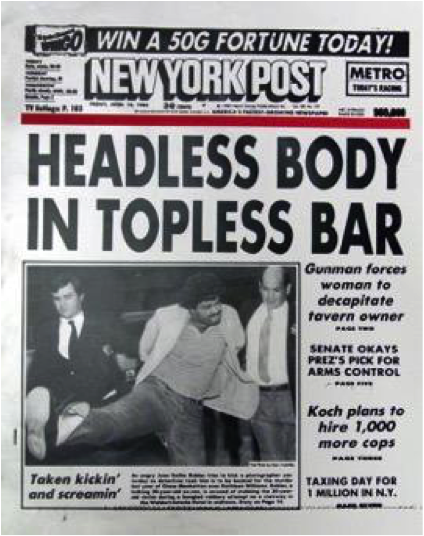 As print rapidly loses ground to digital, VA’s legacy may, indeed, become the stuff of legend. There is no place for the witty, punchy headline in today’s SEO-centric publishing world. Online content demands lengthier, more literal headings that are peppered with keywords and tailored to those ever-scouring search engines.

Of course, that’s not to say there’s no place for creativity in digital content. If anything, the standard of writing needs to be even more engaging and succinct in the online realm. But the role of headlines has irrevocably changed.

In years to come, when the New York Post has completely morphed from tabloid to tablet and another brilliant young managing editor is searching for an online headline for a similarly gruesome murder story, what might we expect? ‘Decapitated Cerebellum in Queens Hotel of Ill Repute’?

Doesn’t quite have the same ring to it, does it? Vale Vincent A. Musetto. And vale the killer headline.