Less than a year after its establishment, GroupM’s NCo committee has won the Power of One award at the eMMies 2015, the regional awards for GroupM Asia Pacific, as GroupM prepares to launch the initiative into New Zealand.

The Power of One award recognises the use of combined strength to the benefit of GroupM clients and its people, in keeping with the idea that we get great things done when we act as one.

GroupM’s aim in establishing NCo, which consists of 15 of the brightest employees aged under 30 from across all GroupM Australia’s companies, was to involve the next generation of industry leaders in the running of the company, ultimately improving the business for the benefit of employees and clients. 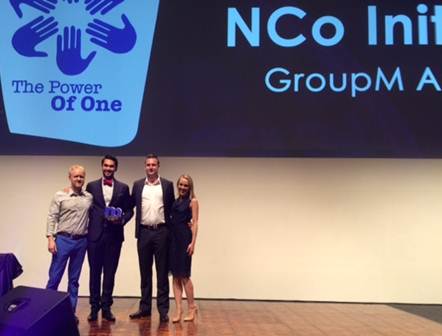 From next week, GroupM will launch NCo in its newly established New Zealand operation with up-and-coming NZ stars Matt Vogts from MediaCom, Chantelle Hurndell from Ikon and Elaine Gibbons from Mindshare. Like their Australian counterparts, NCo NZ members have been asked to respond to brief on talent retention and workplace diversity.

GroupM Chairman & CEO John Steedman said: “The NCo program has had a real and tangible impact on the GroupM business through the implementation of initiatives that affect every employee in Australia. And with our New Zealand operation now firmly established, it makes sense to extend the program across the Tasman. I look forward to seeing how our New Zealand bright sparks tackle the tasks we’ve set them.”

Since NCo’s launch in Australia last July, the committee has already made its mark on the company through the recommendation and adoption of a raft of initiatives aimed at improving GroupM’s gender diversity.