Ten’s Grant Denyer has surprised just about everyone and taken home the Gold Logie last night.

You can check out the full list of winner’s at the bottom of this article.

“The last four years have been truly magnificent,” Denyer said in his acceptance speech.

“It gave me a ladder out of that hole,” he said. “It’s never too late to improve yourself, to be kind to people and you can always be a better you. Family Feud, thank you so much, you saved me.”

Denyer then thanked ABC comic Tom Gleeson for his very public push to get him the Gold. “Tom Gleeson, thanks. Sometimes in this country you need an angry redhead to get things done, and Pauline Hanson wasn’t available.” 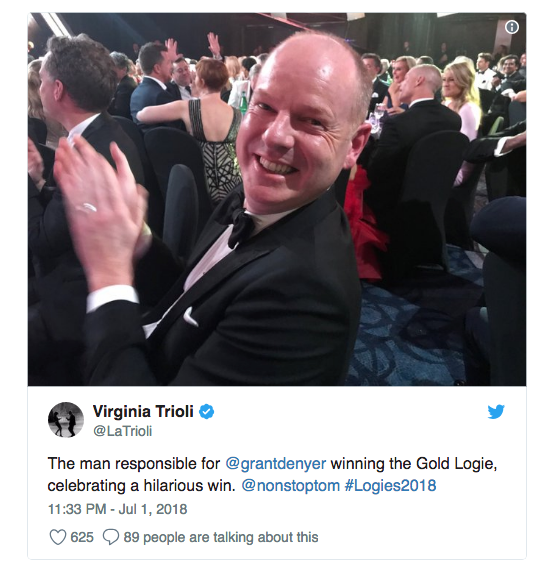 However, the night’s frivolities were again marred by more gaffes that seem to beset the ceremony year after year.

Hollywood actor Russell Crowe tweeted that Grimshaw and Keller were far more deserved recipients than Denyer and they were “derailed by a ‘boys’ club’ gag” in reference to Gleeson’s support.

Bert Newton was attacked for his speech after he apparently made gay slurs about Aussie TV icon Graham Kennedy.

Newton joked that his former co-star Kennedy enjoyed “mentoring” young talent behind closed doors. “You knew if you went to his dressing room and it was locked, he would be inside doing some mentoring,” Newton said.

While others were less happy that Nine’s 60 Minutes was inducted into the Logies Hall Of Fame while the event was being aired on Nine and the network repeatedly spruiked a coming episode – with gangland figure Carl Williams’ daughter Dhakota – during adverts last night.

Others tweeted that 60 Minutes had lost its credibility, namely in light of 2016’s kidnapping fiasco. 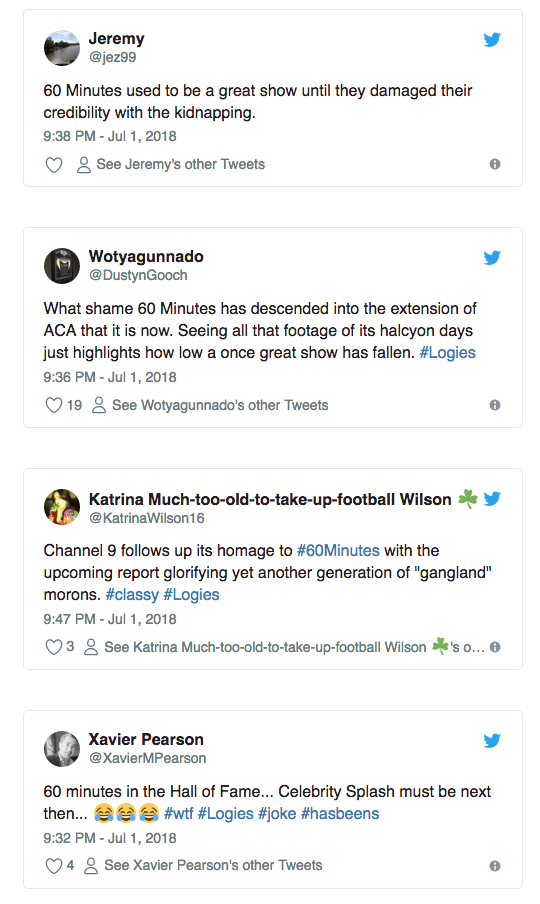