Proof there’s excellent cash to be had in Instagramming cheap lipstick comes news that Kylie Jenner, at the tender age of just 20, is set to become the world’s youngest self-made billionaire, dethroning incumbent Mark Zuckerberg in the process.

American money magazine Forbes is touting Jenner’s achievement in its latest “America’s Women Billionaires” edition that features a black-suited and slightly serious-looking Jenner on its cover. 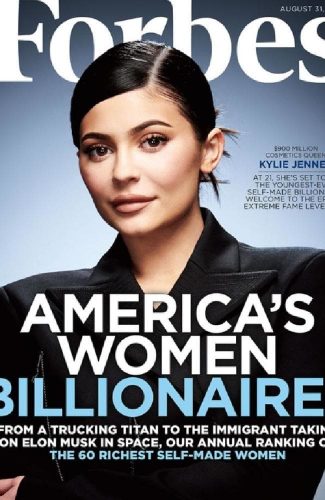 According to Forbes, Jenner’s not yet hit the magic billion-mark, but isn’t far off with her personal worth reported at $US900 million. By contrast, her arguably more famous sister Kim is said to have a measly $US350 million in the bank.

Forbes reports that Jenner is now the 27th-richest self-made woman in the United States, beating out the rest of her famous family.

The younger Jenner’s fortune has skyrocketed thanks to the success of Kylie Cosmetics, a company she is sole owner of. According to Forbes, the company is valued at $US800 million and had an estimated $US330 million in sales last year.

Forbes noted: “Another year of growth will make her the youngest self-made billionaire ever, male or female, trumping Mark Zuckerberg, who became a billionaire at age 23.”

Jenner, who boasts 110 million Instagram followers, telling the magazine: “Social media is an amazing platform. I have such easy access to my fans and my customers.”

And, as the Kardashians have a tendency to do, some people are none to happy about Jenner wearing the “self made” title, suggesting she used her family’s name and impressive fortune to establish her business and subsequent wealth.

Angry anti-Jenners taking to social media to register their disgust at the claims. “Kylie Jenner on the cover of Forbes is nonsense not just because she was born rich but because she was literally HANDED her influence. She steals people’s work, style, and culture. A doctor gave her her appearance, and her mother keeps her name in the news. Businesswoman my ASS,” tweeted one.

Another added: “LMAO @Forbes calling @KylieJenner self-made is a joke. coming from a wealthy family that already dominates the fashion and beauty industry doesn’t really strike me as self-made, especially when her products are so trash she literally couldn’t sell them without her family’s fame.”

Another person penned: “Self-made means having succeeded in life unaided. Used in a sentence: Forbes says that Kylie Jenner is a self-made woman.”

“Forbes calling Kylie Jenner a self-made billionaire when she was born into extreme wealth that most people will never even be adjacent to,” offered another tweeter.