Facebook and the Federal Trade Commission have reached a settlement which will see the social media giant pay a record US$5 billion (A$7.1 billion) fine for privacy violations.

Announcing the settlement via a Facebook post, the social media platform’s founder and CEO Mark Zuckerberg indicated significant changes would be put into place, alongside the fine.

“As part of this settlement, we’re bringing our privacy controls more in line with our financial controls under the Sarbanes-Oxley [also known as the Public Company Accounting Reform and Investor Protection Act] legislation,” he said.

“Our executives, including me, will have to certify that all of the work we oversee meets our privacy commitments.”

He also suggested the company would take a more cautious, privacy-led approach – a far cry from the former motto of “move fast and break things”.

“Going forward, when we ship a new feature that uses data, or modify an existing feature to use data in new ways, we’ll have to document any risks and the steps we’re taking to mitigate them,” he said. 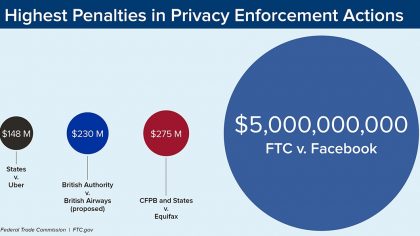 The FTC said the enormity of the fine was to reflect the scale of Facebook’s misconduct.

“The magnitude of the $5 billion penalty and sweeping conduct relief are unprecedented in the history of the FTC,” said FTC chairman Joe Simons

“The relief is designed not only to punish future violations but, more importantly, to change Facebook’s entire privacy culture to decrease the likelihood of continued violations. The Commission takes consumer privacy seriously, and will enforce FTC orders to the fullest extent of the law.”

It also suggested changes were being put in place to dilute Zuckerberg’s power over the company.