American fast food chain Denny’s has copped some social media flak after debuting its new sausage mascot to restaurant customers over the weekend.

However, it’s been quickly pointed out that the fedora-wearing breakfast menu item bares an uncanny resemblance to a walking turd. 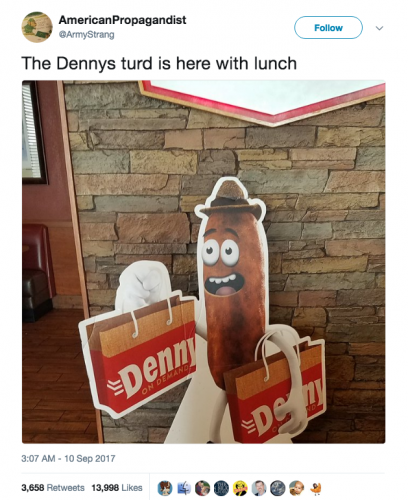 Denny’s has had characters for its breakfast menu (there’s also a fried egg, pancake, hash brown, a slice of bacon and a mug of coffees) since 2014, however, the poo-shaped “Sausage” has largely flown under the radar until now.

Despite Sausage’s similarity to something more unfortunate, the company is sticking by him. “‘Sausage’ has been an important part of the family since [2014],” John Dillon, Denny’s CMO said. “That said, Sausage has been looking for an opportunity to out-shadow his breakfast counterparts for a while, so it was only a matter of time before he tried to jump into the spotlight. While this unflattering comparison was never in his plan, he won’t let it stop him from enjoying his 15 minutes of fame.

“We do not have any plans to change how Sausage looks because…well, he looks exactly how a breakfast sausage should look. And of course, we’d hate to give Sausage a complex because we – and his Grand Slams family – love him just the way he is,” he said.

However, social media had been less kind. Check out some of the responses below: