British tabloid sites The Daily Mail and The Daily Star are in hot water after falsely reporting that Russian President had called for all ex-pats living abroad to “return to the fatherland now” as something BAD was about to go down – we assume the nuking of western Europe!

Even Australia’s very own veritable organ News.com.au jumped in on the act yesterday and reported the story too.

The English-language site Russia Today is reporting that the The Daily Mail and The Daily Star appeared to have picked up the story from a rather obscure regional Russian news site called Znak.com. It came with a whole lot of embellishing that seemed to infer the world was only days away from a nuclear catastrophe.

Both articles came with provocative imagery of maps of Europe, pictures of Putin and nuclear mushroom clouds (The Daily Star’s imagery is featured above). 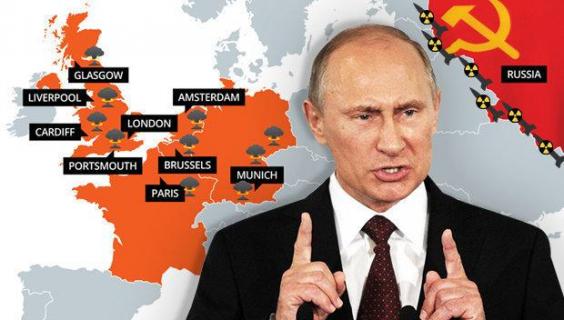 However, it was the Russian Times that called the two tabloids out. However, despite being Russian it appears to be written by English tabloid journalists itself. Its commentary read: “An unconfirmed report in aregional new site appears to be enough for British tabloids to remind readers how ‘Big Bad Vlad’ secretly wants to nuke them.

“The allegation is based on a claim that Russian officials were ordered to fly their families home from the West. Based on anonymous sources, it has since been denied by the Kremlin. Still some British media outlets jumped at a chance for a little Russia-bashing exercise,” the report read.

But more terrifying, the nuclear posturing between Russia and the US isn’t without some substance. Earlier in the week a Russian news presenter, Dmitry Kiselyov, warned live-to-air that any “impudent behaviour” by the US towards Moscow could have “nuclear implications”. Kiselyov, despite being a “journalist”, is widely regarded as one of the Kremlin’s chief propagandists.

Last week, American US Army chief Mark Milley, when questioned about Russia’s involvement in the war in Syria, didn’t hold back when he warned the Russians: “I want to be clear to those that wish to do us harm. I want be clear to those around the world who want to destroy our way of life and those of our friends and allies. The US military, despite all our challenges, will stop you, and we will beat you harder than you have ever been beaten before.” Perhaps the poor old Daily Mail was onto something!