Clemenger Melbourne is the star Aussie agency of the annual Gunn 100 report that looks at the top creative agencies and creatives around the globe.

Clems took the number one spot for the most awarded campaign for 2017 with its “Meet Graham” work for Victoria’s Transport Accident Commission.

It also ranked in at number seven in the list for the top 10 creatives agencies around the globe.

And, in good news for local agencies, Australia was ranked the third most creative nation behind the US and the UK. 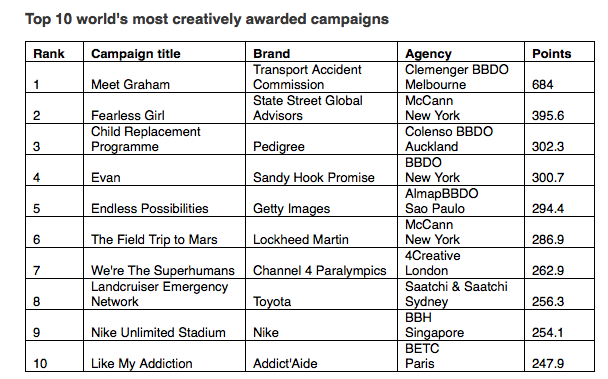 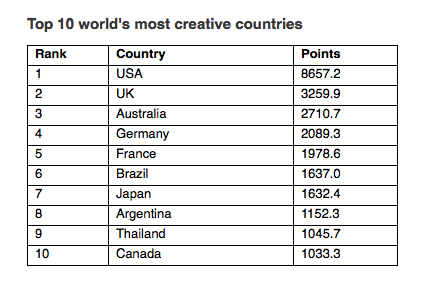 The annual Gunn rankings, which include the top creative agencies, agency networks, holding companies, brands, advertisers and countries, are compiled by analysing the results of more than 40 of the world’s most important international, regional and national creative awards shows.

BBDO agencies dominate the league tables following an impressive performance around the world with four agencies listed in the top 10. Most notably AlmapBBDO São Paulo topped the most creative agencies leader-board for the fourth time in the 19 years of Gunn Report. BBDO New York is ranked second and Dentsu Tokyo third.

BBDO Worldwide heads the networks table, for an impressive twelfth consecutive year with 36 different offices contributing to their total. McCann Worldgroup are in second place and Ogilvy & Mather third.

For the first time Gunn Report has included a ranking of holding companies based on their creative output. Omnicom takes poll position followed by WPP in second and Interpublic Group in third place. 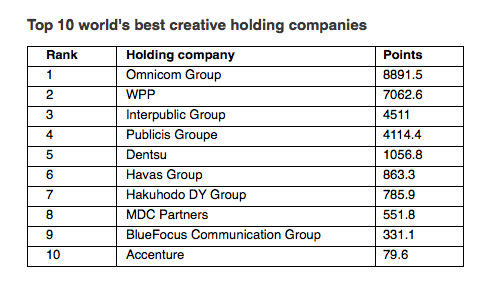 Nike has bounced back from twelfth position last year to take first place in the brands table for the fifth time. Volkswagen, IKEA, Getty Images and McDonald’s followed.

German multinational Volkswagen Group, is the most creative advertiser with both Volkswagen and Audi ranking in the top 10 brands. They had two campaigns in the top 100 and a further 30 from across all regions that contributed to their tally. Mars takes second place followed by Nike, Procter & Gamble and Samsung.