Cannes has been filled with inspirational talks, sunbathing on the beach, tough competition from other ad agencies and (ironically) bad sponsorship. In this blog piece, two Young Lions – Dan White and Simon Gibson from Clemenger BBDO (NSW) – share with B&T what the first few days of the Cannes festival have been like.

We arrived in Cannes nearly three days ago as the festival was being set up. It all felt a bit like the day before a school fete, if your school was in the south of France and sponsored by media and tech companies who love covering beautiful buildings in huge logos. It was not quite normal Cannes and it was far from what we had heard about the festival. 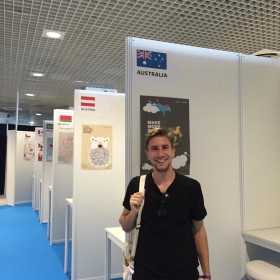 Since then a lot has changed.

We took the 28-hour Young Lions print brief. The client was the United Nations Office on Drugs and Crime and they briefed us to drive likes to the International Anti-Corruption Day Facebook page. We saw a bunch of different ways in from different teams: defining and depicting corruption, focusing on the power of a ‘like’, showing the impact of corruption, and a raft of Sepp Blatter executions (despite the client politely advising us all to avoid it). Most of the teams we spoke to found it tough. We did, and when our names weren’t called up when the winners were announced, we were disappointed but not entirely surprised.

After Young Lions was done, we emerged tired and a bit battered but excited. The festival had started. The beach that was empty 30 hours earlier was crawling with people sporting office tans and looking a bit uncomfortable wearing shorts. 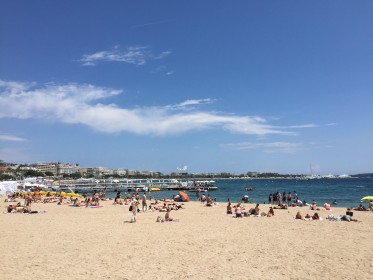 Finally, we’d made it to Cannes.

We caught the first wave of talks. Some were amazing. We immediately realised all of the clichés we mock, sounded much cooler and more inspiring when they came from the mouths of very successful people in the same room as you.

Evan Spiegel, founder of Snapchat, explained away Snapchat’s success with the level of clarity only hindsight brings. For a 25 year old billionaire, he seemed surprisingly humble and not so surprisingly bright. 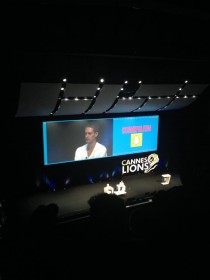 Jessica Walsh, one half of design studio Sagmeister & Walsh, gave an energetic presentation about the ways her agency has created work with such a huge impact.

The two overlapped on a couple of things:

1. The importance of ‘play’

They both talked about finding fun in your work, and making things that are fun. It seems obvious, but if work starts from a fun place, your audience will enjoy it more.

They gave all the normal reasons that personal projects are important. They keep you fulfilled, you can make what you want, and the help you learn for other projects. Like we said, predictable but inspiring nonetheless.

We then saw actress/director Samantha Morton talking about the gender gap in the film industry, which is obviously just as relevant for ours. She was incredibly inspiring although the awkward interview format didn’t give her as much of the spotlight as we would have liked.

Marilyn Manson was next. While we were both disappointed he didn’t wear his makeup, we were glad we stayed in the auditorium while others sunned themselves. He spoke to a room full of marketers about how painstakingly he has constructed his rock’n’roll identity. He had some very good stories too.

One day in and it’s everything we expected and a bit more. It’s hot. It’s inspiring, it’s a bit confronting, and ironically, it’s full of bad ads and sponsorship.

Looking forward to a few more days of craziness before it all calms down again in Cannes.