Installed by S&J Media, the wrap was revealed on Melbourne’s north-eastern train lines, and is a first in outdoor advertising. The piece was developed to embody Swinburne’s philosophy of innovation, and reveals agency Venus Comms dedication to producing campaigns that push limits and engagement.

Developed in line with Swinburne’s successful ‘Think Forward’ positioning, the complete interior of the train ­– including walls, roofs, flooring, doors and seats ­– has been skinned to look as if it is from the future, immersing students in ‘tomorrow’ with every journey. 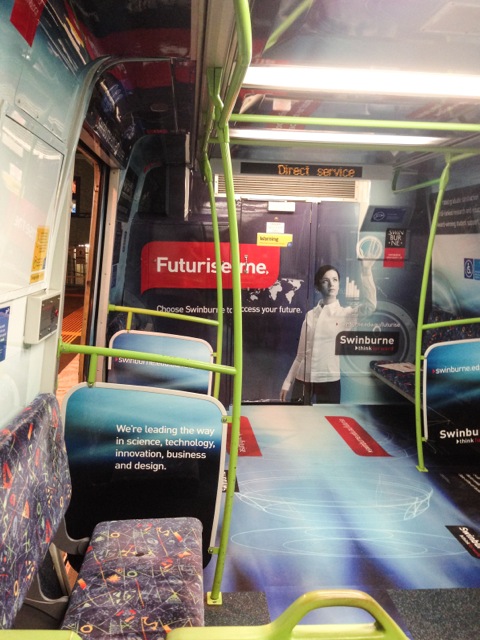 Deane Goodwill, CEO of S&J Media Group, said: “We are delighted with the opportunity to collaborate with Venus Comms and Swinburne University of Technology in bringing a new advertising opportunity to the Australian landscape. This is the first time we have covered every surface of the interior of a commuter train, completely transforming it, and it looks fantastic.”

“The completely remodelled interior immediately impacts the commuter upon boarding the train, as if they are truly stepping into the future,” he added.

The ‘Futurise me’ train wrap will run until December 22.