The dark brown decadent dessert is being combined with an even darker brown True Blue spread to create what has to be one of the most confusing flavour combinations our tongues have experienced over the years.

The rumours had been circling around the Internet for the past month, and as of this afternoon, Cadbury has Tweeted out it’s developing a chocolate and Vegemite flavour chocolate bar, to be available at the beginning of June, or perhaps “sooner”…

.@Cadbury + Vegemite. The most talked about flavour combination yet… is real! #ChocPlusWhat pic.twitter.com/rU7S7CgYQi

Buzzfeed had been embarking on a crusade to figure out if it was real since a photo of an apparent choc-vegemite bar surfaced on Reddit. Buzzfeed writer Brad Esposito was ecstatic to confirm the good news.

Cadbury spokesperson, Audrey Green said based on the other products it was clear there was an appetite for new flavours: “We also read and listen to hundreds of comments we get from fans every day asking us for more flavours and suggesting new ones. We have seen a flavour trend towards sweet and salty combinations and felt it was time to put that to the test and create an Australian twist.

“Cadbury Dairy Milk with Vegemite brings two of the nation’s favourite and most iconic brands together in a unique and surprisingly delicious combination. The block is available nationally for a limited time.

“We believe this product brings new innovation to the chocolate category and will play on fans’ curiosities and challenge their expectations. We are committed to pushing boundaries in a landscape of ever-changing consumer tastes and increased choices on-shelf. This product launch is the latest chapter in our campaign to create a national flavour debate and celebrate flavours with existing and new Cadbury fans.”

The choc brand had been on a social media investigation to find the perfect ‘foodporn’ for its new flavours. Using the hashtag #ChocPlusWhat social media peeps put out suggestions of what chocolate should be paired with. Green said as part of the campaign the choc brand is also bringing a number of other limited edition flavours. She said: “Pretzel and Peanut, Salted Caramel and Golden Toffee. The campaign is being run on social media and is being supported nationally in-store.”

So far Twitter is already divided of the new flavour. 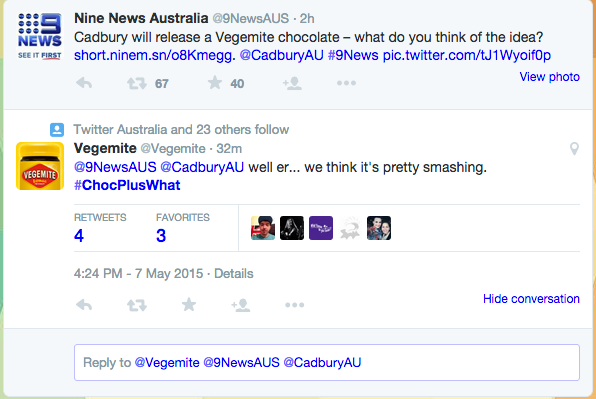 @MattTarrant @Vegemite @CadburyAU hello. Vegemite = salty. Chocolate = sweet. Caramelly = delicious. ALL OF THE GOOD THINGS IN ONE. CAN YOU