Real burgers are cooked over real flames says Burger King, who has kicked off a new campaign to dive into backyards and find tasty burgers and their makers.

Around New Zealand, millions of BBQs are blazing, so for the next two months, 50 Backyard Burger Kings will open around the country, with each spot decked out as the real deal.

Each kit handed out is a Burger King restaurant in a box, complete with ingredients to make 16 Whoppers, plus your own customised cooking utensils, hat, apron, matches and even a light up Burger King road sign. 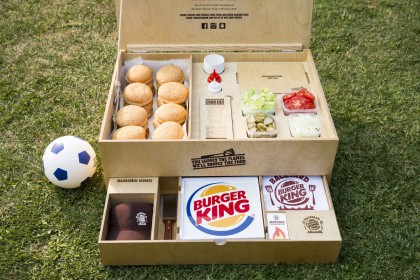 Backyard Burger King kits are being given away through a TV, digital, in-store and social campaign with potential candidates being directed to apply at backyardbk.co.nz.

Application numbers are already exceeding the entire campaign’s targets in just over four days. To date more than 12,500 entries have been received.

“Burger King’s been using flames to cook Whoppers since 1957. Despite almost sixty years of cooking this way, many people don’t know or don’t believe their burgers are still made over real flames. Backyard Burger King is an engaging way to help reassure them they are,” Colenso BBDO ECD Steve Cochran said.

Burger King NZ GM of marketing James Woodbridge added, “We are thrilled with the response to the campaign to date and to have this many entries just shows how many Burger King fans are keen to experience the flame grilled taste for themselves.

“We’ve always had an active and engaged group of social followers so we can’t wait to see what they share from their own personal Backyard BK’s.”