The Canterbury Bankstown Bulldogs jersey will be looking decidedly bare next season after yet another sponsor pulled the pin on the club following its disastrous ‘Mad Monday’ celebrations last month.

Shorts sponsor Wicked Sister Desserts yesterday decided to pull its sponsorship of the Club following player antics and the management’s handling of the incident.

Fairfax Media is today reporting that the Wicked sponsorship was worth $350,000 per season. 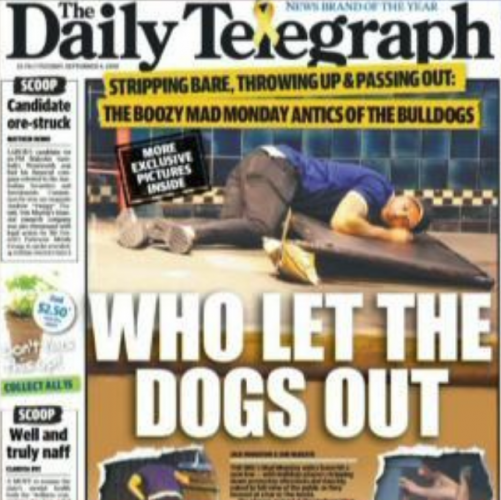 Bulldogs players were photographed drunk and two players arrested following end of season frivolities. The images making their way onto the front page of The Daily Telegraph.

Yesterday, Wicked said in a statement: “Today we informed the Canterbury-Bankstown Bulldogs that Wicked Sister Desserts will be terminating its sponsorship of the club effective immediately.

“Wicked Sister Desserts is a family owned business and we share the same family values as our customers. What has occurred is completely unacceptable.

“We do not in any way condone the behaviour and nor do we support the response by the leadership of the club in the way they have handled this matter.

“We accept that there will be some who criticise our company for taking this decision but our company and brand stand for certain values and behaviours, and we expect the same levels of decency and respect from those we align ourselves with,” the statement read.

The NRL slugged the club a $250,000, but the amount was later halved after the Club issued their response to the governing body’s breach notice.

Players Adam Elliott and Asipeli Fine were both fined $25,000 by the club and suspended. Both have been charged by the police for with wilful exposure and will pair will appear in court on October 24. Two other players, Marcelo Montoya and Zac Woolford, were also fined $10,000.