In the lead up to the G20 meeting, an ad calling for climate change action has been rejected by a Queensland airport.


Brisbane airport has rejected an advertising billboard depicting a farmer calling for action on climate change on the grounds that the issue is “too political”.

Environment and development groups had sought to place the billboard in the airport’s arrivals hall in time for the G20 leaders’ meeting in two weeks time. 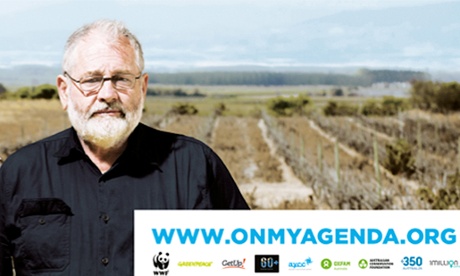 Linked with a social media campaign, it originally said “Action on climate change is #onmyagenda, Dear G20 leaders please put it on yours” a reference to Australia’s resistance to having climate change on the G20 agenda at all.

The groups then agreed to remove the words “Dear G20 leaders” – leaving the billboard to read simply “Action on climate change is #onmyagenda, please put it on yours”.

But according to WWF chief executive Dermot O’Gorman, media buyer oOh!media replied that the airport was still rejecting the billboard, which features South Australian farmer David Bruer, “because they consider climate change as being too political”.

A statement from the WWF said that the banning of the billboard won’t stop the campaign.

The #OnMyAgenda campaign, developed by digital agency Circul8 and backed by nine national and international organisations, encourages people to tweet G20 leaders asking them to include climate change as a stand-alone item on the G20 agenda, as it was on the previous eight G20 summits.

#OnMyAgenda launched yesterday despite a surprising decision by Brisbane Airport to reject one of the billboards because it deemed climate change to be a political issue. This however, didn’t prevent thousands of people finding the social hub where you can tweet the 20 world leaders, join the Thunderclap and comment on why climate change should be on the G20 agenda.

WWF CEO Dermot O’Gorman said: “Climate change is a global problem affecting economies, societies and environments all around the world, we can’t afford to sweep it under the carpet, we owe it to future generations to deal with it right here, right now.

“That’s why it’s important it’s a major item on the G20 agenda. There is no solution to climate change without G20 members on board. These countries are responsible for around 80% of global emissions and more than 80% of global economic activity.

“Climate change is on the agenda of Australians and people around the world, that’s why our campaign uses real people dealing with the profound impacts of climate change,” he said.

Jamie Madden, head of strategy at Circul8 said: “It’s been great to work with so many organisations with one collective goal, one message and one simple creative piece. The power of this campaign comes from this unilateral solidarity.”

Circul8 creative director, Alex Marshall, said: “Circul8 is very proud to partner with WWF to launch an inspired campaign and help create positive change.  Our voice is more powerful when we speak as one.”