In our series of showcasing the work of our talented finalists for the B&T Awards, we’ve seen the entries of Advertising Agency of the Year finalists, as well as Branding & Design, and today we’re perusing the Direct Response Agency of the Year entries.

From those who chose to get involved, we bring you samples of the hot as hell entries from AFFINITY, Columbus and WiTH Collective.

There are VERY LIMITED tickets left to the industry event of the year, where over 800 people are getting frocked up to see if their agency will be crowned king. By the way, if you’re yet to cast your votes for People’s Choice, you’ve got a matter of DAYS. Vote here to take the lead!

Now enjoy learning why these hot shots made it as finalists in Direct Response:

Direct is no longer a nasty early morning TVC or the boring bit of mail in your letter box, instead it’s become a holistic brand approach. Today’s agencies must not only be good at delivering insightful, effective ideas but now need to become reputable experts in data, CX and technology as well. AFFINITY is excited to be part of this vanguard.

And right now, no one is using the power of data to drive performance like AFFINITY. Data enables the ultimate in performance, and as Australia’s most awarded data-driven agency, we’re driven by results. Our groundbreaking methodology, integrated media & digital model, and eclectic team have driven meteoric growth in terms of new accounts and our people but more importantly for our clients.

Time to embrace the new, keep hugging the great of old and celebrate an industry that loves direct, and actively thinks in terms of brand performance without reservation.

AFFINITY is a data-driven media, CX and Ad Agency and is honoured to be a finalist in the B&T Agency of the Year Awards.

Performance is in our DNA. Columbus was born a pure search agency in 2006 and has evolved into a Performance and Experience agency, underpinned by data and technology.

We understand consumers to leverage innate intents, tapping into their idiosyncrasies that make them human to inform our clients’ business decisions. Our proprietary data management platform, Columbus Compass, enables us to make informed, responsive decisions at scale.

Our unique Centre of Excellence team is empowered to drive a culture of innovation, with 12 product specialists working seamlessly alongside client villages. This integrated model has delivered over 60 first to market initiatives and four global firsts.

One of these global firsts was recorded with the Victorian Government during the Summer Bushfires in late 2015. To drive action, we created a dynamic content solution which integrated emergency.vic.gov FDR warnings into paid search. We mapped this real time data against the nine CFA districts to generate hyper-local relevancy.  During the height of summer, 1 in 2 Victorians were clicking on our ads.

Our people are our greatest success story. Often described as a family, we’re proud of our culturally and gender diverse team, currently comprising of 45 per cent females and 55 per cent males, hailing from 24 different countries.

In an industry where high churn rates can be the norm, our retention strategy is simple. Ensure each Columbian is engaged, enjoying flexibility in their roles and rewarded for their loyalty. ‘Flex Factor’ allows teams to ditch peak hour and embrace flexible working hours with the added option to work from home.

Columbus College is our online training program providing industry leading product, strategy and best practice training. Our API connection to Google certifications saw us become the most qualified agency in ANZ. We also retain our number one Performance Agency ranking by billings highlighting our brand strength in market.

For WiTH Collective, it’s been a big, big 12 months in every respect.

An ability to focus on the power of data and the persuasiveness of great ideas saw WiTH Collective successfully pitch against some of the biggest agencies on the biggest brands. They were the only agency in Australia to win on Qantas brand, Optus, Virgin Mobile, also adding The Australian War Memorial to their growing portfolio.

Their unique focus on data and ideas also helped WiTH win their way onto big brand rosters, including Isowhey (a Blackmores brand), Champix (a Pfizer brand) and the agency is now also working with Facebook and Instagram regionally. WiTH was also re-appointed as the retained agency of record on Qantas Loyalty for 2 more years, without a pitch.

The agency made some big hires, including Steve Coll as CCO, and launched some big campaigns. They teamed Christopher Walken up with Qantas to launch Assure, smashing campaign targets. With the help of Ian Thorpe and Mark Wahlberg, WiTH and the Optus Small Business team reached 40% year on year growth, producing newsworthy campaigns the whole country was talking about.

Best of all, business has been big, with profitability well in excess of the industry average. The agency reached a big milestone recently, as it was acquired by the Dentsu Aegis Network, a strategic alignment that promises big things.

Shout out to our amazing sponsors for the biggest night of the year! 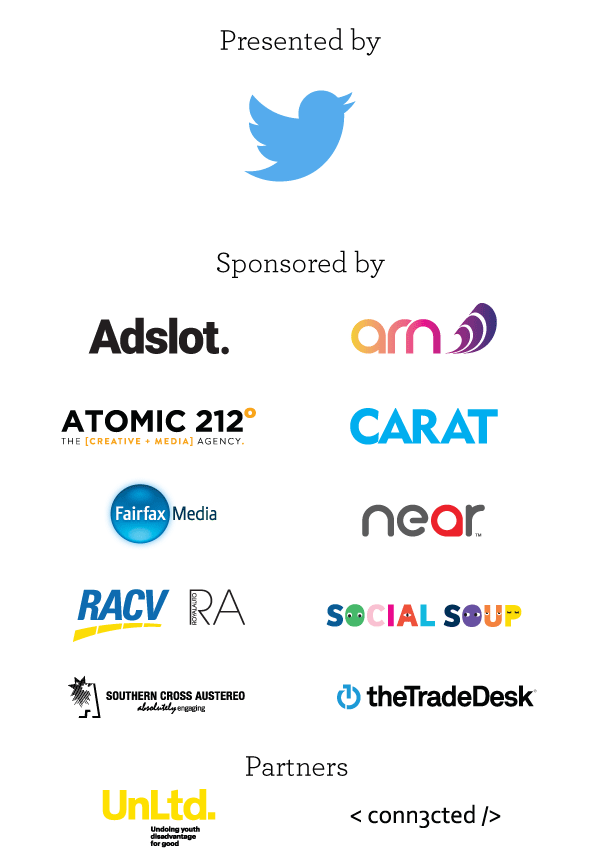