With 33 years of operation under its belt, the publication looks to the future with its new print, social and digital strategy.

Beat’s iconic print magazine has been given a facelift with a clean and modern design, ensuring it doesn’t look a day over 20.

This makeover goes hand in hand with a brand new website, which has improved functionality, responsive mobile design and vibrant imagery front and centre.

No weekend plans? No problem. Beat’s essential and comprehensive gig guide is bigger and better than ever, and has been designed for both punters and planners.

With new functionality, the online gig guide will begin to feature events beyond Melbourne.

New features include: – Searching for gigs within a particular radius or suburb – Musicians and venues can now list their events online – Searching for events by music genre or category – Direct links to tickets and an ‘add to calendar’ function Live music venues will always be the heart and soul of the magazine, and the new Gig Guide flaunts the thriving music culture this country has to offer. 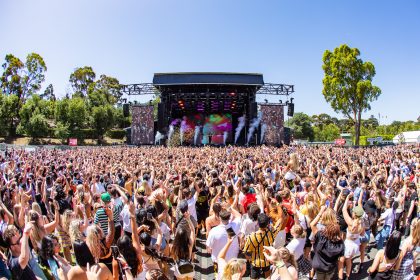 Beat is deeply connected to the music, arts and entertainment scenes, so it makes sense the magazine will be covering new topics that its audience wants to hear about, including gaming, film and television.

Readers can expect to come across the newest additions to Netflix, the soundtracks that sit underneath iconic movies and the latest video games from homegrown developers.

The mag will never abandon its roots, though.

Collaborations with various brands have taken viewers to beloved venues and picturesque regional towns — and this is just the beginning of what’s planned. Beat is well into its 30s, but its content is still young at heart.

It’s this focus on the ever-changing Aussie music scene that keeps Beat marching on, now and forever.

“That means rock’n’roll, arts, comedy, festivals and everything else you need to know being presented better than ever before — part of our continuing journey to lead the way digitally while retaining our independent voice and 33 years of music and cultural heritage.”

“Beat’s evolution, both in print and digitally, maintains a constant thread within Australian culture — and now, Beat is more accessible than ever.”

“As Melbourne’s most comprehensive Gig Guide, we’re proud to have developed new functionality that gives our readers more.

“We’ve designed it for both punters and planners, so now they can find live entertainment — comedy, music or otherwise — on any night of the week, and in any suburb.

“With the addition of user-generated content, we’re looking forward to seeing it continue to expand.”