Bauer Media has unveiled a new generation of Defiant women in its latest insights study.

Amid growing criticism older women have become ‘invisible’ to the advertising industry, Bauer Media embarked on a research journey to understand this idea of ‘invisibility’.

Contrary to the story we are being sold by today’s advertisers and marketers, Bauer Media found a new cohort of women 50-64 who are far from invisible. 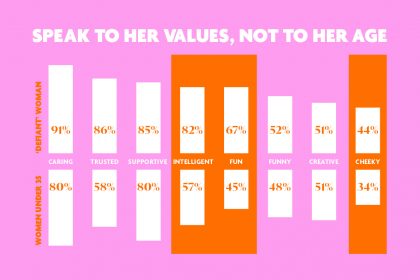 Only one in three agree ‘I often feel unnoticed and invisible by society’.

These women are supremely confident, recreating social norms, leading the way and showing other women her age what life could look like.

They are ‘growing’ not ‘growing old’.

The research titled “The Defiant Woman”, found a staggering 70 per cent think that advertisers aren’t interested in speaking with women their age and 75 per cent find advertising often ageist.

Brands fail to recognise who these women are and what matters to them.

They focus on a singular view of who she is, often grouping the Defiant woman with women the same age as her mother and ignoring the other facets of her identity.

So it’s no surprise the Defiant woman does not notice advertising or marketing.

Bauer Media’s Story54 general manager, Jane Waterhouse said: “These Defiant Women were born into a tide of rebellion and opportunity, which advertisers and marketers sometimes fail to recognise.

“They are replacing ageing narratives with a new language of celebration and self-love.

“The female economy is worth $28 trillion worldwide. The biggest slice of this market is women over the age of fifty, yet brands are invisible to her.”

Waterhouse added: “We believe there is an enormous opportunity here for brands to connect with this age group of women who are living some of the best years of their lives.”

Bauer Media is dedicated to reflecting these Defiant women through their brands, such readers have long been part of Bauer’s audience.