A battle between Bill Shorten and News Corp has erupted after the labor leader slammed The Daily Telegraph for calling him a “slippery salesman” who was “loose on the detail” of his late mother’s life.

On Monday night, Shorten told ABC’s Q&A his mother “could have done anything” but chose to take a teacher scholarship in order to look after her younger siblings, instead of studying law.

Following Shorten’s appearance on Q&A, theTelegraph wrote an article dragging Shorten because he did not mention his mother “who sent him to Melbourne’s elite Xavier College, graduated with a law degree from Monash University in 1985 with first-class honours, and went on to practice at the bar for six years.”

The report said: “Make no mistake — Shorten did not lie. But a glaring omission in his story means that he comes off as the slippery salesman yet again.” 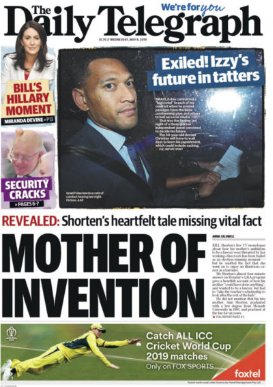 Shorten described the report, which was published late last night, as a “new low” for the paper who used his late mother to attack him and her memory.

In a statement, Shorten said: “They think they know more about my mum than I do.”

The article also noted the omission of her late career switch to law “leaves voters to wonder if [Shorten] doesn’t mention this midlife plot twist because it works for him to paint himself as the downtrodden working-class bloke.”

Shorten isn’t the only person to lash out at the Telegraph’s report. Twitter users have aired a similar sentiment to Shorten, with one user saying calling the paper’s reporting “a new low” would be giving it “too much credit”.

Bill Shorten, in describing the @dailytelegraph’s reporting as “a new low”, is actually giving the paper far too much credit

Meanwhile, ABC presenter Jonathan Green asked: “why would anyone work for the daily telegraph.”

… and why would anyone work for the daily telegraph. https://t.co/8V0ua4kjdr