However, a number of Sky presenters have today moved quickly to distance themselves from Dean’s on-air views labelling them as a new “low”.

Dean used his Sky News segment to suggest if the Cambodian-born Soutphommasane (who collects a $330,000 taxpayer funded salary) didn’t like it he should “get on a plane”.

Dean, who is also editor of the right-skewed Spectator magazine, fumed to viewers: “Tim, if you don’t like it, join Yassmin (a reference to Yassmin Abdel-Magied), hop on a plane and go back to Laos where I doubt you will find the taxpayer paying you $300,000 a year to lecture bigotry and racism which is what you are doing by attacking Anglo-Celtics.”

He added that Soutphommasane’s parents had probably come to Australia as refugees due to the Anglo-Celtic values. “I’m sure that they didn’t mind coming to a country where Anglo-Celtics had died, given their lives to create the peace-loving culture that we have,” Dean said.

However, Dean’s views haven’t been universally shared by other Sky presenters who advocate for more multicultural voices in Australian media and didn’t feel they needed to return to their homelands because of their views.

Sky presenter Patricia Karvelas added she was a big supporter of multiculturalism, before adding she “had nowhere to go”. 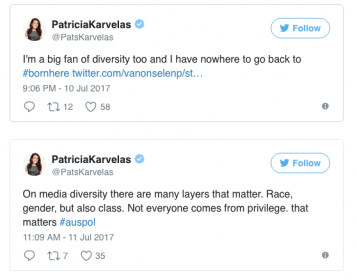 Soutphommasane and the Human Rights Commission have long petitioned for migrant quotas on Australian boards and in politics to better reflect Australia’s multiculturalism.

Last week, in a Senate submission, the Human Rights Commission said when it came to Australia’s media, politics and industry “ethnic and cultural default of leadership remains Anglo-­Celtic’’.

“Some commentators complain about society being mollycoddled or of minorities having protections against hurt feelings. They complain about there not being enough freedom of speech to racially insult or offend others. And they complain when people are called out on racism.

“They complain about people encouraging a ‘victim mentality’ or for ‘playing the victim’.

“Often you get the impression it is a graver offence to speak out against racism than it is to perpetrate racism,” he said.