The Reserve Bank of Australia has predicted a decline in the number of automated teller machines, as consumers move to digital payments and card transactions.

According to the Australian Payments Clearing Association (APCA) in June 2015 there were 31,829 ATMS across Australia, making Aussies the fifth largest number of ATMs per million in the world.

Despite the crazy amount of ATMs, the number of withdrawals has fallen by around 20 per cent since 2009, it looks like the blame is the switch to card-less payments, Internet banking and EFTPOS. 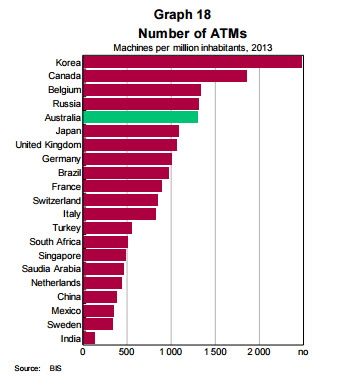 In its “Submission To The Senate Inquiry Into Matters Relating To Credit Card Rates” the RBA stated: “While there has been a modest rise in average direct charges on foreign ATM transactions, the number of ATM transactions on which a fee is charged has been declining. Estimates from the latest survey indicate that a direct charge was paid on around 28 per cent of all withdrawals in 2014/15, down from around 33 per cent in early 2010.

“In absolute terms, the number of charged withdrawals declined by around 20 per cent between 2010 and 2014/15, suggesting that in total cardholders paid around $60 million less for withdrawals than in 2010. The decrease in charged transactions is likely to have been even more marked for balance enquiries, where cardholders now have ready access to account information via internet and mobile banking.

“ATM withdrawals compete directly with eftpos cash-out. Use of eftpos cash-out increased significantly in the years following the reforms, as cardholders became more conscious of ATM fees and sought to avoid them (though the use of cash-out has also begun to decline recently, reflecting declining cash use)

Best of the best filtered media