APN Outdoor’s #RoadtoRio promotion has flooded the market over the past few months with transit mania overcoming agencies across the country.

Proving once and for all that transit takes you everywhere (even to Rio), the Outdoor leaders have announced the major winner of the #RoadtoRio competition drawing the official prize in their Sydney head office yesterday.

Featured image: Jessica Simpson of OMD, Victoria with David Cordner and Kristian Muhllechner of APN Outdoor being presented her prize!

The #RoadtoRio transit promotion launched in market in late March and was an extension of 2015’s #myrealworld transit study. The 2016 iteration consisted of further ethnographic research as well as a deeper look into the real-time tracking of buses and trams, affirming the expansive coverage of transit in our metro areas.

As part of the promotion and a nod to their sponsorship of the Australian Olympic Team, APN Outdoor have been running a competition in conjunction, whereby clients have gone into the draw to win a trip to the Rio 2016 Olympic Games, as well as other great instant prizes.

Mark Fairhurst, general manager – sales, APN Outdoor commented, “Being the unrivalled transit leaders means that we are heavily committed to promoting the medium and each year it seems to get bigger and better. 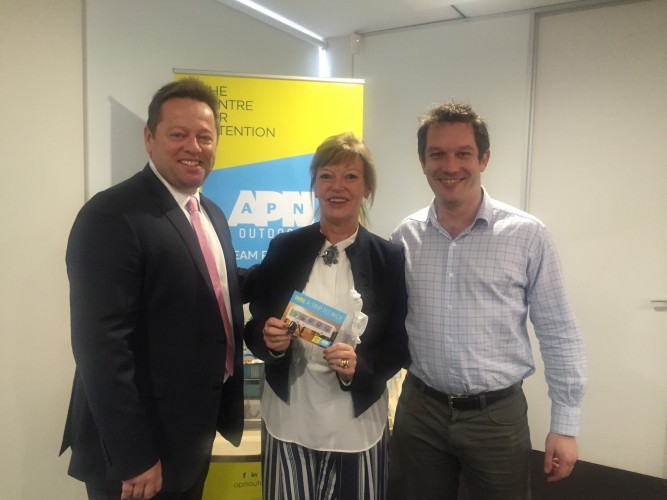 “As transit is #1 for ad recall across all Outdoor formats, we know the potential it holds for advertisers and the ability of the medium to truly get brands noticed. On top of the compelling research and presentation, the competition has been a very exciting element of the campaign and we are all very excited for our winner!”

Taking home the major prize was Jessica Simpson from OMD Melbourne who was completely overwhelmed when her APN Outdoor representatives showed up with the good news this morning!

Fiona de Jong, CEO of the Australian Olympic Committee said, “We are very excited to be part of this promotion, and thrilled to see such an excited winner joining the Australian Team in Rio.

“The #RoadToRio is well and truly alive and we are thrilled that our partners and the wider public are so excited and getting involved in the lead up to what we are sure will be a great Games.”