When it comes to women being responsible and protecting themselves in the bedroom, it seems there’s a clear frontrunner in brand that the ladies prefer.

A new survey from market research company Pureprofile has shown that HERO Condoms are at the head of the pack for women down under (badoom chh), with 78 per cent choosing it over competitors.

It also found that young women are more comfortable buying HERO Condoms than any other brand.

“Around 60 per cent of 18-24 year olds said that either themselves or someone they knew were embarrassed on uncomfortable with purchasing condoms and I think the provocative packaging of the typical condom box plays a large part in that,” HERO chief exec Dustin Leonard said.

“It’s crazy that this is the norm, given that women makeup up to half of the overall condom market. We’ve designed HERO to be more appealing to women and our market research proves we’ve achieved that goal, with nearly 63 per cent of women saying they would be more comfortable bringing a HERO box to the register.”

For context, here’s what the HERO packaging looks like: 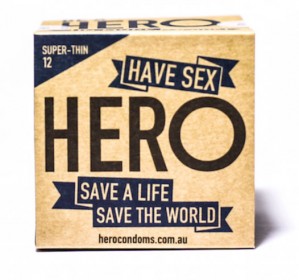 They survey also found an overwhelming preference that are socially responsible and environmentally conscious, with 94 per cent of respondents saying they would switch to a brand that is associated with a good cause, assuming it had similar price and quality to the brand they were currently using.

The vast majority of Aussie women feel likewise. The survey found that more than nine out of 10 women thought it was important for brands to be socially responsible and give back to society, while less than 5 per cent of respondents thought that businesses shouldn’t be looking at ways to reduce their impact on the environment.