The ABC reporter Natasha Exelby who was caught staring at a pen during a bulletin read has been stood down by the public broadcaster after the comical incident over the weekend went global.

And fans of the ABC and Exelby are none to happy about the punitive punishment meted out, including the leader of the opposition, Bill Shorten, senator Sam Dastyari and a number of journalists. There’s even a Change.org petition calling for the newsreader’s reinstatement.

Check out Exelby’s blunder below:

Exelby – a causal newsreader for the ABC – has been stood down from any further hosting roles, however, it’s unclear if she will return to the public broadcaster at all.

The newsreader herself managed to see the funny side, tweeting: “Not my finest hour. Myself and my mesmerising pen honourably salute you!”

Last night Bill Shorten tweeted his support: “It’s live TV. This is just ridiculous.” While senator Dastyari said he would raise Exelby’s sacking in a senate estimates hearing where ABC management are held to account by federal politicians. 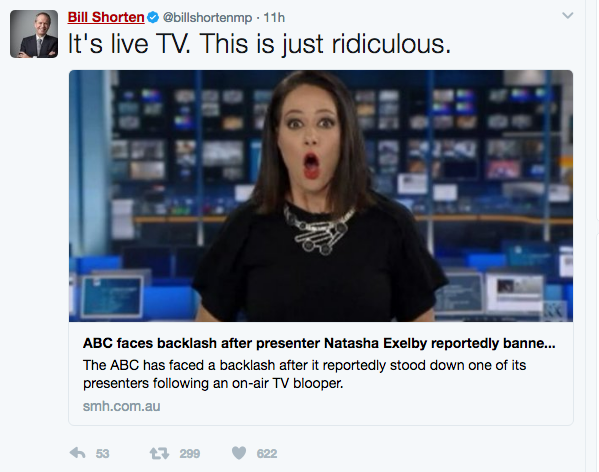 Dastyari added Exelby’s treatment raised real concerns about the ABC’s work culture. “If she is going to be punished for such a minor, humorous and innocent error – I think bigger questions need to be asked about the culture of the ABC,” Dastyari told Fairfax Media.

The footage also aired on last night’s Media Watch with some even suggesting the whole thing was a conspiracy by the broadcaster to get rid of Exelby.

“With over 800 shares and 1400-plus comments, did you guys have a role to play in making this go viral, and consequently assisting ABC management’s decision to remove her from future on-air duties?” one viewer wrote to the program’s Facebook page. While another added: “Thanks to Media Watch – she’s been boned.”