We love a young guest poster at B&T and that’s exactly what we have today. AWARD School graduate and now writer at Whybin\TBWA Sydney, Chloe Saintilan (pictured below), reminisces on her old alma mater and says not being top of the class was what helped her career… 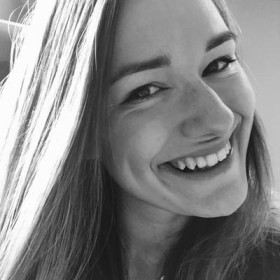 And I’m telling you that when the AWARD School season is done and dusted, and the next one rolls around, whether or not you got in The Top 10 doesn’t make any difference whatsoever to your career.

This isn’t to say that getting into the top 10 isn’t a great achievement. It is! But I wish someone had told me back in those days after graduation that it doesn’t mean you have less a chance at getting hired and kicking butt as a creative.

I remember at my graduation night, one of the speakers enthusiastically declared that if you didn’t get in the top 10 then you could give it another shot next year.

But with two years now having passed I would argue that, quite frankly, it really doesn’t matter whatsoever where you place.

In fact, I would argue it’s better NOT getting in the top 10.

You have to work a bit harder to prove yourself since you can’t just whip out the ‘I got in the top 10’ line. Think a job-hunting version of the famous Avis ad ‘We Try Harder’. And creative directors will love the ambition and determination you show going about this.

My art director Andrew and I didn’t get in the top 10. This means we didn’t get the exposure that comes with placing in the top 10 – like profiles in B&T and a press release in Campaign Brief. But that didn’t mean we couldn’t find our own ways of getting our names out there.

I created my meme CV. Andrew did a hilarious proactive Tinder campaign. Both got us exposure and even some individual job offers.

To make our books better, we also got together and created proactive work for the clients of agencies we were interviewing at.

And a couple of months later were hired by our dream agency, where we still work now. And funnily enough, our ECD’s Gary and Wes never asked if we got in the top 10 either.

I realised that in terms of job prospects coming out of AWARD School, at the end of the day the most important thing isn’t where you place – it really just comes down to your attitude.

For me, looking back at those months after AWARD trying to get our first gig, having not gotten in the top 10, something that (ECD of With Collective Sydney) Steve Coll said in our TV lecture really rung true.

He said that what he looks for in a junior team are the ‘three A’s’ – attitude, ambition and ability. And he emphasised that the most important of the three are attitude and ambition. Ability is honed with time and experience.

It literally means nothing as to whether or not you get in the top 10. Do. Not. Be. Devo.

It’s your attitude and ambition that’s the most important.

Instead of doing AWARD again, spend that extra 2k on creating that stupid app idea you have in your iPhone notes.