You know as well as I do, there’s no such thing as a free lunch.

Most people take their LinkedIn profile seriously, so by signing in we hope it will cut down on trolling.

We fervently believe in transparency at B&T and so I’ll say right from the outset that gaining access to our readers’ profiles does increase our chances of making money. But by the same token it should also allow us to deliver a better reader experience. By being able to target people more effectively, more of the ads we serve you, along with the editorial content, will be relevant and therefore useful content in itself.

Of course some people will never sign in, we accept that and there’s heaps of great content for you to enjoy. But thousands of you already have. And to those people we say thank you.

Might I also caution those who hold their LinkedIn data so sacred that they won’t share it with us that they ought to get off Facebook right now and never go on Google again either. Because, people, they know more about you than any of us can probably bear to think about. And unlike us, they have the power, resources and intent to use it with extreme money making prejudice.

As a complete aside, and probably the topic of another opinion piece, reliable sources have told me that senior Google staff are genuinely apprehensive about just how rich Facebook’s data set is. The social network can target your behaviour, habits, buying cycles and life to an unerring degree.

Because we’re bringing our offerings in line with all of the fabulously clever 21st Century technology doesn’t change who we are and what we hope to achieve with the B&T brand. We all work at B&T because we absolutely love to.

If we wanted to make millions we would have done something else, anything else, and been far better off fiscally. The point I’m labouring is this: we want to inform, entertain, provoke and inspire anyone who has any interest in advertising, marketing and media. To do that it does take time, effort and money. We hope you keep that in mind when you assess our efforts.

Call me sadistic, but I’m rather intrigued by the storm clouds swirling over the media industry, threatening to rain on our parade day-by-day; a shit storm, if you will.

The media landscape is evolving at an unprecedented rate; goodbye to the rolling green hills and plentiful crops that were the rivers of gold from yesteryear. Traditional advertising in its bountiful form is now a geriatric patient in the terminal illness ward. So here we are…

The old B&T is dead and buried (may she rest in peace), and with that comes the birth of the new site, which has generally been well received by our readers. Generally. A small chunk of you, which I believe to be about 1% seem a little disgruntled by the change… specifically this in particular: 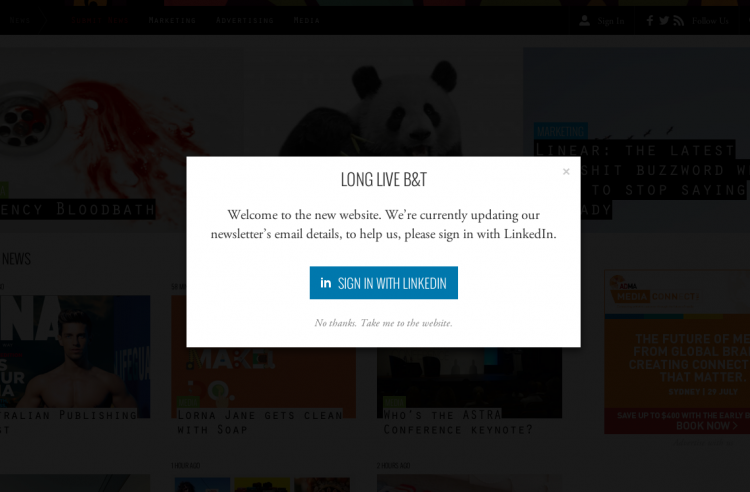 Chris Graham, owner and editor at New Matilda thinks using social media as a currency to access premium content is a “very interesting concept” and it also means you’re not parting with any funds on that piece of plastic in your wallet.

What you are parting with is your information. “Exactly!” I hear a small chunk of you exclaim. “@BandT, you won’t be accessing my information” others have tweeted.

But let me ask you this; why are you comfortable submitting all of your information to a faceless global enterprise such as Linkedin?

A follower tweeted this (Ironically, we’ve protected their identity):

Clearly they want to keep their information private and not share it with a publication. That’s cool, you’re welcome to enjoy our free content. But just have a little think about the volume of information that you’ve already handed over to the public domain. Here’s what we just found out by trawling social media and Google…

The subject, let’s call them Blurface, graduated from the University of Manchester in 2002, they’re a Senior Account Manager at PR firm Recognition and Blurface’s birthday is on February 5. They watched the final State of Origin game with two British chums at the pub but they’re not a keen football fan, instead Blurface prefers the underwater life and currently holds a PADI Advanced Open Water scuba dive certificate. They’re also a British Parachute Association Member, a self-confessed air guitarist and recently dyed their hair pink. Well, we could go on, but you get our drift.

The idea of living in this digital world and not leaving a digital footprint the size of a gorilla is preposterous. B&T simply wants to access some information to deliver a reading experience that is unapologetically innovative. We preach about big data each and every day, but no media outlet is putting into practice the very things we champion… until now.

At B&T, we are so aware that the “old journalism” business model doesn’t work. Nobody has the answers yet. We’re in experimentation mode and it feels like we’re nearing a model that could provide some true publishing answers in our quest to run a successful media business and our unwavering commitment to deliver quality content to our readers.

readers need to accept the changes made at the publishers’ end in order for the industry to move forward.

It all seems to boil down to perception, and the fact that society appears to begrudge change. “Every time Facebook changes its interface, users are outraged… it lasts for a few days, and then they get over it” Graham explains.

As a journalist, I’m frustrated when readers aren’t willing to either pay for content or appreciate the necessary marriage between editorial and advertising departments (or sign in with LinkedIn). It makes the hard work that goes into our musings feel terrifically undervalued.

As the Internet continues to snowball, the monopoly media has had on information is sinking fast and trust in reporting is abysmal to say the least. Journalists are in the bottom 10 of the Reader’s Digest Trust Survey and currently considered less trustworthy than a taxi driver.

Once trusted publications are no longer the primary source of information or entertainment.

Perhaps the underlying reason consumers won’t pay for content or in fact share their social media details with a publication is because news organisations continue to feed the beast; churning out crap 24/7, and deliberately compromising editorial virtue in a bid to get the most hits.

While many of you have jumped on board and supported B&T as it journeys into the spooky, dark and mysterious future of publishing, I would like to rally the small remainder of you who seem a little uptight about privacy and social media.

We just want to be friends so we can kick shared interests around the field.