Starcom has developed an Australian media first for Samsung and its sponsorship of Netball Australia with a live TV Snapchat integration for the Suncorp Super Netball grand final on the Nine Network tomorrow.

This is the first time that the netball grand final – between the Sunshine Coast Lightning and the Giants – will be broadcast live on the Nine Network.

Working closely with Nine, Snapchat and creative agency Iris, Starcom developed the first ever netball live story on Snapchat and first ever live-to-air Snapcodes to create a fun netball experience that resonates with the young audience.

In the campaign, which includes TV, digital, social and at the game, Samsung challenges netball athletes and sporting fans of Australia to ‘Bring Your A Game’.

Samsung asked Suncorp Super Netball clubs to showcase their ‘A Game’ in content filmed on a Samsung Galaxy A5.

Across Snapchat, the campaign was further customised for the netball audience with a Snapchat Filter featuring the competing teams created specifically for the Suncorp Super Netball Grand Final, available via a Snapcode within the broadcast on Nine and at the game. 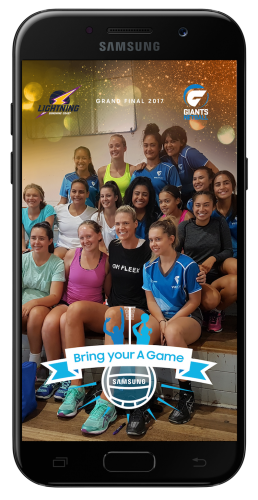 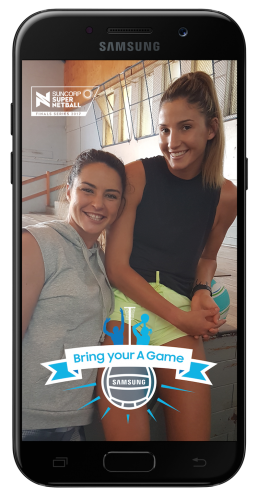 Samsung’s head of brand partnerships, Holly Adams, said: “As proud innovation partner of netball in Australia, Samsung is continuing to invest in unique and exciting opportunities to elevate the sport within the community.

“We know sporting fans, particularly females, engage with their role models via social, with 63 per cent of women surveyed between 16 to 54 years of age agreeing that technology has enabled them to discover role models that they would not have found themselves.

“Additionally, Galaxy A Game has allowed us to further tap into this through the Suncorp Super Netball season.

“We are excited to work with Snap and Nine on being the first brand to bring Snap from TV to Australia.”

Starcom’s strategy and business director, Elaine Quirke, said: “Starcom’s role for this campaign was to create a strategy that allowed us to engage with Netball Australia’s young audience in a more meaningful way than just a TV sponsorship, and to differentiate Samsung as an innovator in what will be the first live TV final of the game on Channel Nine.

“Using our ‘human experience’ lens, we needed to speak the language of the Millennial audience to achieve that cut-through. We did this by working closely with Snapchat and Nine to create the first ever live TV Snapchat integration in Australia.”

Nine’s head of netball, Keeley Devery, said: “We love working with partners like Samsung, who share Wide World of Sports’ commitment to innovation. We’re excited to help bring their Snapchat innovation to life this weekend in our broadcast of the Suncorp Super Netball grand final.”