McDonald’s has brought back its past loveable character Hamburglar, however it appears he’s had a revamp.

Gone is the puppet-esque, chubby cheeked guy. Instead he’s been replaced by what The Verge believes is reminiscent of a dad who is too eager with his Halloween costume.

He’s a burger flipping thief, with a family now.

He’s no longer this guy. 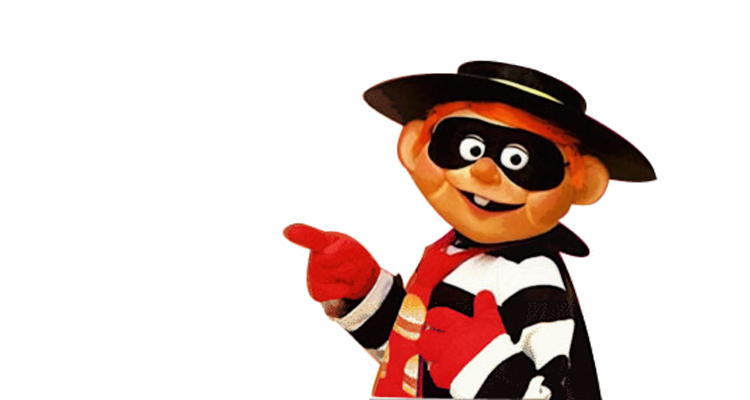 With ‘Hamburglar’ trending on Twitter, it appears the Internet is torn between wanting to bed this guy and wanting to throw a cheeseburger in his face.

Thank you new Hamburglar. I always wanted a fast food mascot who looked like he plays trombone in a ska band pic.twitter.com/Vk70zvs5Aw

The new hamburglar, more like the new daaaaamnburglar that dude can get it.

What idiot called this guy The Hamburglar and not Mumford and Buns pic.twitter.com/51sNKyHbRl

The new Hamburglar looks like he’s just a panel van away from starring in an episode of SVU. pic.twitter.com/swkQJe7vG3

As well as eliciting some pretty funny suggestions.

Why does the new Hamburglar look like Blankman’s second sidekick? pic.twitter.com/lBIoTUSZFF

Pretty sure new Hamburglar is actually 1990s WWF wrestler the Repo Man. @sundownmotel back me up here. pic.twitter.com/Wy0T7AUSGd

In a statement to Mashable, Joel Yashinsky, McDonald’s’ Vice President of U.S. Marketing, said: “”We felt it was time to debut a new look for the Hamburglar after he’s been out of the public eye all these years. He’s had some time to grow up a bit and has been busy raising a family in the suburbs and his look has evolved over time.”