Brand activation agency Graffiti Group has been enlisted as part of the Transport Accident Commission’s efforts to highlight the dangers of pedestrian distractions at this year’s Australian Open.

A new partnership between the TAC and Tennis Australia has pedestrian road trauma firmly in its sights after 2014 saw a 22 per cent increase in pedestrian deaths.

Graffiti has collaborated with the TAC to deliver a range of experiential activities at the Open, highlighting the potential for a lapse of concentration when using mobile phones, music players or other sources of distraction to end in disaster. 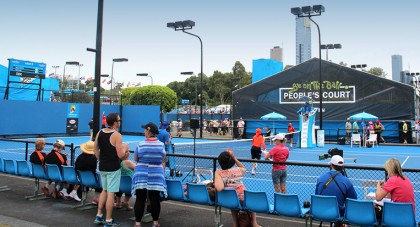 Under the tagline ‘Be on the Ball’, the campaign aimed to encourage the 700,000 tennis fans expected over the two-week event to consider their personal safety at all times when walking in public.

One of the major activities at this year’s Open has been the People’s Court. For the first time in Grand Slam history, 300 everyday tennis fans got to experience a once-in-a-lifetime opportunity to play on the same surface as their international tennis heroes. Show Court Five was renamed the People’s Court with fans selected via an online competition to play a 30-minute match in Grand Slam conditions; complete with ball kids, pre- and post-match interviews, a chair umpire and commentary. A professional camera crew was on hand to capture all the action and participants received a highlights package to share on social media.

Graffiti’s general manager, Kerrie Spaargaren, said the distractions theme was front and centre at the People’s Court and at a separate Distraction Free Zone where fans were encouraged to disconnect from technology.

The Distraction Free Zone takes the form of a fully air-conditioned enchanted garden where visitors can escape the heat and the distractions of everyday life.

“This time of the year is the busiest on Victoria’s sporting, social and events calendar and it doesn’t get much bigger in terms of profile than the Australian Open,” Ms Spaargaren said.

“Graffiti has created an unexpected activation campaign for TAC that delivers a distractions message that’s relevant and engaging to our target audience visiting the tennis”.