Any doubt you had about which search engine was the most used across Australia has been utterly squashed flat by Roy Morgan with stats showing just how much time we spend on Google compared to other search engines.

In a four week period, the 16.903 million people aged 14 years and over who went onto Google, spent on average 2.5 hours on the search engine. This equates to around 552 million hours Googling each year, said Roy Morgan.

While the research giant says Google’s two main competitors, Bing and Yahoo7, do see a hefty amount of unique visitors every four weeks Roy Morgan also found those who use other search engines, also use Google too.

It’s not one or the other. It’s Bing and Google. Or Yahoo7 and Google.

Last year, 16.903 million Australians aged 14 years and older went onto Google at least once in a four week period. Bing had 1.9 million and Yahoo7 had 1.82 million.

Roy Morgan created the below chart – cheekily saying you might need to adjust your screen resolution to see the orange, which indicates the people who did not use Google as well as the other search engines. 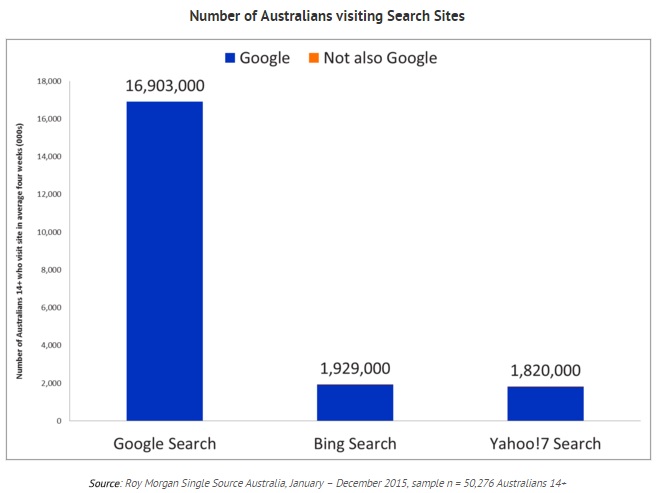 While Googlers spend 2.5 hours on the platform over four weeks, Bing only gets 24 minutes, and Yahoo7 nabs just more than seven minutes, according to Roy Morgan.

“Australians spend more time searching on Google in around two days than they do on Yahoo7 Search in a whole year—and it takes a whole week to surpass Bing,” said Roy Morgan.