A Melbourne Metro train has been transformed, bringing a taste of Fiji to the travelling public of Melbourne.

Eye-catching and high impact artwork on the roof, floor, doors and each end of the Comeng train interior allows the commuter to immerse themselves in the dream of travelling to Fiji and to escape the daily grind.

It’s taken just eight hours to transform these carriage zones with the striking imagery, allowing Tourism Fiji to communicate directly to the consumer for the entirety of their journey in a close proximity environment. 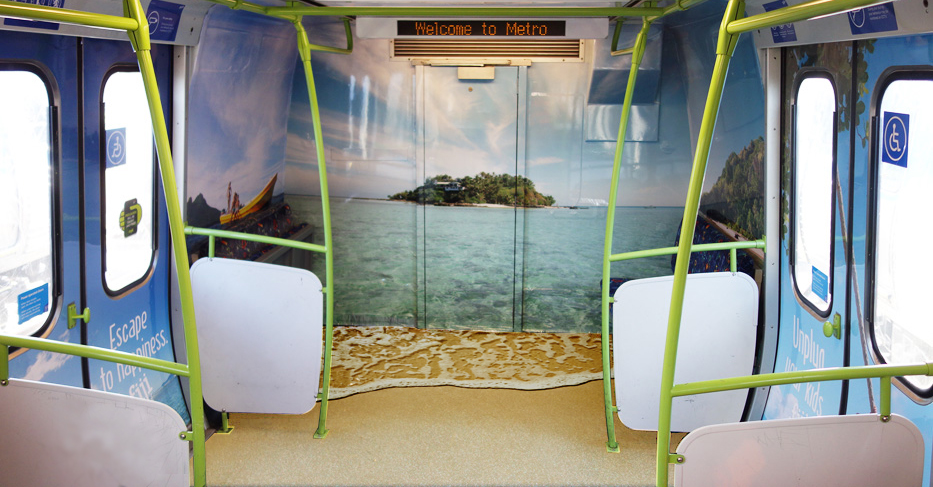 “We know that half of the daily trips into the Melbourne CBD are made by train,” says Deane Goodwill, CEO of S&J Media Group.

“We also know that commuters will spend an average of 23 minutes making that trip. This presents the perfect opportunity for Tourism Fiji to interact and connect with that consumer”.

The dedicated train with tailored creative will make close to 900 trips right across the Melbourne rail network over the 3 month campaign, delivering maximum exposure to Tourism Fiji.

“Tourism Fiji was looking for a way to give commuters a taste of happiness, because Fiji is where happiness finds you,” says Carlah Walton, regional director Australia for Tourism Fiji.

“Neo at Ogilvy’s creative approach and cutting edge idea has effectively achieved that.  It’s as close to being in Fiji as you can get without getting on a plane”.

As demonstrated by the Tourism Fiji campaign, S&J Media Groups success is based on providing innovative train interior advertising campaigns, maximising the available space within a carriage and allows advertisers the opportunity to elaborate on their message to a captive commuter audience.