Launching on 10 September, the campaign establishes Oats2Go by further strengthening the nutritional advantages of the product and appealing to people who wouldn’t normally consider the liquid breakfast category. 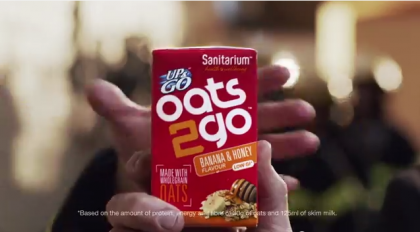 Sanitarium General Manager – Marketing, Daniel Derrick, said BWM Group Sydney has a strong understanding of the direction in which the company wanted to move with Oats2Go.

“The launch of Oats2Go is a new direction for the Up&Go brand. With BWM, we have established Oats2Go as an even more nutritious start for those active Australians who don’t have time for a sit down breakfast in the morning,” Derrick said.

“BWM took the challenge of amplifying the nutrition credentials of Oats2Go and ran with it. They’ve created a great campaign that shows how Oats2Go contains all the protein, energy and fibre of a bowl of oats and skim milk,” Derrick said.

The 15-second TVC is the handiwork of the award winning Josh Frizzell, famous New Zealand Director at 8Com, who has written and directed movies, music videos and advertising for global audiences.

“Together the outdoor, point of sale and broadcast elements communicate the health and lifestyle benefits of Oats2Go to a totally new raft of people,” Belgiovane said.