Earlier this week, the company’s director of international operations, Pramod Rao, penned a blog post about the company’s move, saying how the late-night delivery time and porn-consumption habits were rather in-line. We understand the ads were mainly in India.

“We were talking about how to tap into the already buzzing late-night delivery space, and started looking at innovative marketing opportunity areas,” wrote Rao.

The creative was, to be fair, pretty funny. 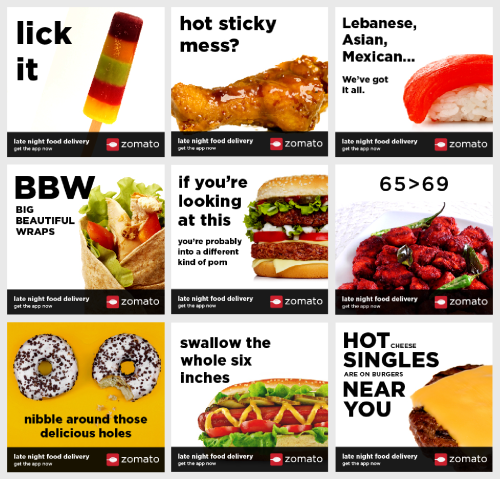 However, a few days later the company wrote another blog post about the ads’ withdrawal, saying that while it had good traffic for a “ridiculously low cost”, some had been offended by the manoeuvre and the service had removed the ads.

“The response to the campaign was largely positive,” wrote Deepinder Goyal, founder and CEO of Zomato.

While we’ve not been able to check the sites on the work computer, as the computer history might raise a few eyebrows from our bosses, we have contacted Zomato in Australia for more info.

It’s not the first time a food company has used the skin flick sites to nab some hungry customers. Eat24 experimented in a similar manner, with successful results, of which the team has written all their insights on the blog.