Three quarters of American’s aged 12 to 24 use Facebook, but just as importantly, two other Facebook properties, Instagram and Whatsapp make the top 10. The other social belle is Snapchat which now attracts comfortably half of the teeny bopper set.

According to a blog by Edison Research and Triton Digital their Infinite Dial research, “… has been tracking social media usage since 2006, and has tracked the shifting usage of various platforms from MySpace to WhatsApp over the past 10 studies.”

In its report on the study, business intelligence site Statista notes that the data doesn’t reveal frequency of use. However they conclude, “It does make pretty clear that even if young Americans consider other social platforms more hip, they are not yet ready to abandon Facebook altogether.” 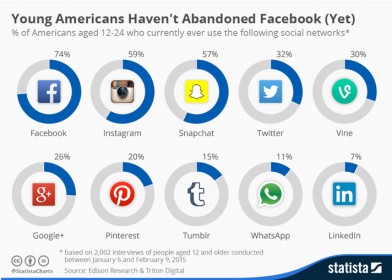 Facebook of course no longer has the youth market to itself (not that it ever really did.)

In a separate survey by Global Web Index that only looked at teens found that three in 10 use Snapchat. (Edison/Triton study looked at ages 12-24 so you can’t compare the results directly)

According to GWI, “Globally, 14% of Teens are using Snapchat each month. But in its home country of the US, this figure rises to 3 in 10. Snapchat is also booming among Teens in some European markets – 37% in the UK and 35% in Ireland are Snapchatters.” 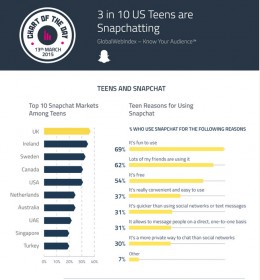 “As to why teens are turning to the service, 6 in 10 teen users say it’s because their friends are on it too, with the most popular reason of all being that Snapchat is fun to use. Tellingly, privacy comes at the bottom of the list; while it might have been key to the app’s initial positioning, it’s no longer a priority for the teen audience.”

This article originally appeared on www.which-50.com