Having had its commentary labelled as “horse shit” and “utterly pathetic”, Seven’s Winter Olympics coverage is in strife once again amid claims of racism.

Last night, former Australian freestyle skier Jacqui Cooper (below) was covering the women’s aerials in Pyeongchang w hen she blurted out the rather contentious comment, “All Chinese competitors look the same”. 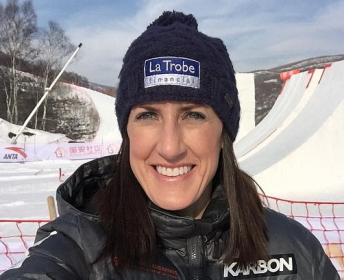 Cooper was talking about Chinese arial skier Yan Ting’s (main photo) first jump when she said: “Very Chinese. They all look the same, they’re very hard to tell who’s who.”

However, Seven immediately went into damage control, saying Cooper’s comments were related to the skier’s technical ability and not her actual looks.

“During tonight’s cover of the women’s aerials, commentator Jacqui Cooper a former Olympian and World Champion – noted than an aerial manoeuvre was in a technical and style sense, very Chinese,” the broadcaster posted to its social media accounts.

“Meaning that the whole of the Chinese aerial team are trained in the same way – and the manouevre referenced was a classic technically perfect, trademark of that team’s style. At no time was the commentary racist, intended to be racist or offensive.”

However, Cooper’s comments were quickly picked up by Seven viewers who took to social media to say they had been stunned by what they had heard.

On top of having its commentary team lambasted for a lack of knowledge of the sports they are commentating on, Seven has also been savaged by viewers for replaying events Australians are featured in at the expense of other gold medal events. The Games continue until the 25th of February.