in this opinion piece Jess Ross (pictured below), managing director of Sydney-based digital design studio Wilson Fletcher, argues a distinct lack of competition among Australian businesses is leaving them – particularly digitally-speaking – a long way behind their overseas competitors.

It’s a common refrain: “We’re playing catch up”. “Everyone’s scrambling to get to base camp”. “They’re the only ones to have invested in modernising their platform”. Whether five, eight or 10 years are quoted, it seems Australian businesses universally consider themselves laggards when it comes to digital transformation and the ability to act on opportunities in the digital age. 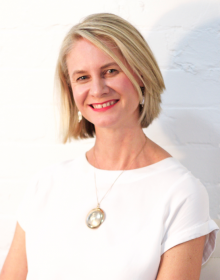 This is a curious fact when you consider that Australians are a country of early adopters. We rank seventh in the world in terms of internet access and have one of the highest smartphone penetrations in the world (almost 90 per cent of adults by some measures). It’s fair to say that the vast physical distances that need to be traversed as the world’s only nation/continent gives us more impetus than most to invest in and value digital connectivity.

We also have a long history of invention that has produced (among other strokes of genius) icons of Aussie masculinity and grooming such as the two stroke lawnmower, insect repellant and bank notes you can surf with.

It’s easy to argue that the lack of digital innovation from Australian businesses is down to population density, or distance or internet bandwidth. But there is another answer that’s easy to overlook – a straight lack of competition.

Competition is the tangible evidence of addressable opportunity – new competition much more so. So it’s not a big leap to conclude that the lack of competition in Australia encourages Australian businesses to focus inward and defend existing territory instead of embracing the need to reinvent themselves and looking to the horizon for viable digital opportunities to exploit.

There are examples of the effect of this littered all over the digital economy. Online retail is now 20 years old. But even in 2014, 53 per cent of Australian retailers still had no online sales channel at all. It took UK online retailer ASOS, which was once flying four jumbos full of clothing to Australia every week, to jumpstart Australian fashion e-commerce in 2013.

Similarly, streaming services launched in Australia and the US at roughly the same time (2007-8). But it took the threat of Netflix launching here last year for serious investments to be made in the industry with the launch of Stan (jointly owned by Nine and Fairfax), major marketing pushes by Presto and Quickflix and a price slash by Foxtel.

In the US, 63 of the top 100 companies by revenue are less than 30 years old – companies like Google, Apple, Amazon, Facebook that have built their vast businesses by disrupting the previous generation. Consider the impact, for example, of Amazon, the biggest online store on the planet, on Walmart, the world’s largest retailer of any kind. In 2012, Walmart’s $469bn in revenue dwarfed Amazon’s $61bn. But less than 2 per cent of its sales were online. In 2015 Walmart will spend between $1.2 and $1.5 billion on e-commerce globally and even more on digital transformation across the business to enable it to compete with Amazon. Innovations like drone-based delivery, automated re-ordering and goodness knows what else will follow.

In Australia, 18 of our top 100 companies are less than 30 years old. And, when you exclude superannuation, mining and construction, just three remain – Sonic Healthcare (one of the world’s largest medical diagnostics companies, providing laboratory and radiology services), Origin Energy and Virgin Australia.

Without the disruptive influence of significant young challenger brands, it’s easy to see why Australia’s largest companies have not had the impetus to act on the opportunities presented by the digital age. After all, it’s much easier to defend your existing way of doing business than it is to reinvent yourself for the digital world as Walmart is attempting to do. Australia Post, I’m looking at you.

The lack of competition in Australia is well known. But it’s time Australia recognised that it’s not just consumers who are suffering as a result. Business and our national economy suffers too. In today’s world, the Australian market’s lack of competition is a ticking time bomb making it downright dangerous for a business to ignore ideas, technology and knowhow that are readily available in the free market. Doing so is not sustainable. There is bound to be a bold new challenger and an ensuing customer backlash at some point.