The consumer now has the voice and marketers are increasingly struggling to communicate their message. And the reason for this? Many CMO’s have lost touch, or don’t understand, the under 30s.

According to Jeremy Swartz (pictured below), ANZ vice president of customer engagement firm Thunderhead, businesses are struggling with this new Millennials-lead new order.

He told B&T many companies are still using the “spray and pray” message and “hoping they get two per cent return” on their efforts. 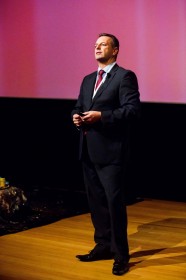 Swartz cites Thunderhead research (albeit international) that found 85 per cent of CMOs struggled to communicate their message to customers.

“The reason for that shocking statistic is that they’ve lost touch with the younger generation,” Swartz argued.

He admits that Gen Ys may not yet have the purchasing power but what they are doing is changing the marketing landscape and it’s the older generations who are now following the Y’s lead.

“It’s less about their purchasing power but more about how they’ve changed the world. The older you get I think you interact with brands differently. This whole new digital world; the smartphone; young people are driving that and we’re now seeing older folk adopt what the younger people are doing rather than the other way around.

“If you think about the sustainability of a brand it’s that next generation that you need to capture,” Swartz said. “It you think I’ll target the over 35s because they’re the ones with the money then you are missing the boat. The next generation’s not coming through, it’s already arrived!”

And the art of capturing the elusive Millennial? “It needs to be sexy, it needs to be punchy and it needs to be relevant,” he said. “And remember whether you’re 25 or 55 we still bank at the same bank, shop in the same department stores or whatever – but both groups want very, very different things from that experience and the message that’s delivered.”