The Channel Nine/Fairfax marriage is already off to a rocky start after one of the newspaper’s star columnists, Peter FitzSimons, tweeted that Nine’s breakfast show Today was on its last legs because of poor ratings.

FitzSimons, of course, is also husband to Lisa Wilkinson who sensationally defected from Nine to rival Ten last September.

Apparently, FitzSimons’ original tweet was in response to a story on News Corp websites that showed Today had lost 22 of the 23 ratings weeks this year to arch-rival Sunrise.

The tweet, that FitzSimons quickly deleted, read: “Something will have to break. It cannot go on, in the current form past Chrissie (Christmas), surely. I have followed the numbers closely. Today would not have been this low for at least 10 years.”

FitzSimons claims the original tweet was meant to be a private message between he and a friend, one he accidentally broadcast to his 67,000 Twitter followers.

But the Fairfax hack was quick to backpedal; however, even his follow-up apology tweet came with a further dig at Today. 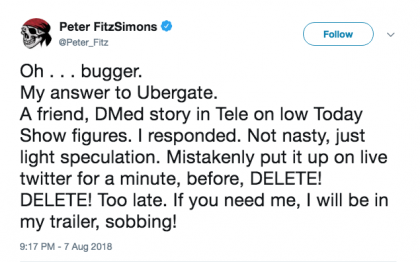 “My answer to Ubergate,” FitzSimons wrote in a reference to the now infamous conversation between Today host Karl Stefanovic and his Channel Nine journalist brother Peter.

“A friend, DMed story in Tele on low Today Show figures. I responded. Not nasty, just light speculation. Mistakenly put it up on live twitter for a minute, before, DELETE! DELETE! Too late. If you need me, I will be in my trailer, sobbing!”