Advertise with us
Posted 9 January, 2019


An American weatherman has been fired after allegedly using an offensive racial slur during a live broadcast.

Listen to the (admittedly rather grainy) reporting here.

In a Facebook post following his dismissal, Kappell said: “What happened on Friday, to me, it’s a simple misunderstanding. If you watch me regularly you know I tend to contain a lot of information in my weathercast, which forces me to speak fast.

“Unfortunately I spoke a little too fast when I was referencing Dr Martin Luther King Jr. So fast to the point where I jumbled a couple of little words. I’m my mind I knew I mispronounced but there was no malice nothing that I could’ve… I had no idea the way it came across to many people.”

However, WHEC-TV bosses were having none of it and promptly gave Kappell his marching orders.

Station vice president and general manager Richard A Reingold said: “These words have no place on News10NBC’s air, and the fact that we broadcast them disheartens and disgusts me; that it was not caught immediately is inexcusable. I regret that we did not immediately interrupt our broadcast and apologise on the spot.”

Yet, Kappel is not without his supporters, with many agreeing it was simply a slip of the tongue rather than anything racist. There are now calls for the weatherman to be reinstated, with 2000-plus people signing a petition calling on the network to give him his job back.

Check out some of the social media support below: 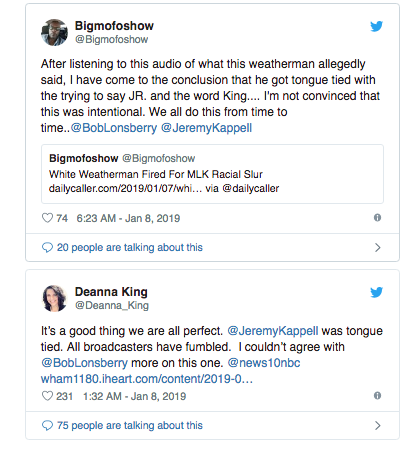 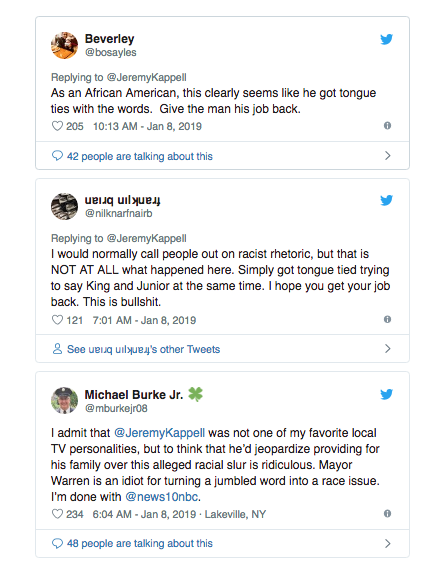