In this column piece, Aussie media veteran Vicki Connerty (pictured below) was recently diagnosed with breast cancer and returned to live in the UK. Here, she talks of the life changes since her diagnoses and her new, more relaxed view of adland… 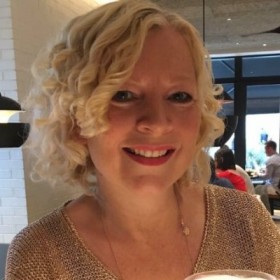 When I was asked to write this blog piece for Wyse Women, I didn’t initially understand why my experience or perspective would be particularly relevant. I naively assumed that it’s new mums and women with families who are driving the current shift towards flexible working hours. Instead, I was encouraged to learn that around half of their 400 members are women without children who are simply looking for more flexibility, either due to burn-out after 20-odd years in the industry, because they want to start a business or because they have had a major life event occur and are simply looking for more balance in their lives. I guess I fall into that latter category.

On the 5th day of 2015, I sat in a boardroom staring uncomfortably at Ian Perrin, my CEO. He was a bit tearful, probably because I’d just told him on the first day back after Christmas that I’d been diagnosed with Stage 3 breast cancer. Meanwhile I was a bit tearful because it was barely 9am and I’d just had to say the word ‘breast’ repeatedly in front of my CEO. I hadn’t felt that awkward since accidentally slamming a door in Bono’s face during my time working at a classic rock radio station in the nineties.

At the time of my cancer diagnosis at the grand old age of 41, I’d been running Newcast, the content and brand partnership division of ZenithOptimedia Australia. After fifteen years working for media agencies and media owners in the U.K. and Australia, I’d been hired by ZO in 2011 to launch Newcast into the Australian market. Back then, it was my dream gig, the chance to launch and run my own agency division in a city I’d fallen in love with. And over the years, we really did some great shit. We had some awesome clients. We won some awards. I grew the team of one into a small but perfectly formed merry band of multi-talented ladies. We worked alongside some outrageously gifted content creators and smart media brains. We won some clients, we made some money, we lost some clients, we made less money. Sometimes it was stressful but sometimes it was joyful. I smugly thought I’d found a good balance.

Fast forward to the Boardroom of Tears, 2015. The thing about suddenly finding yourself caught in the eye of a cancery storm is that it forces you overnight to re-evaluate pretty much everything around you. Everything had to be re-prioritised in a literal heartbeat. Including my working life. It’s tricky to be cross about the size of a client’s logo when your surgeon’s just told you that you’ll lose your hair sixteen days into chemo. It’s hard to summon up the energy to justify your fees when you’re still trying to work out what on earth a compromised lymph node is. And it’s a challenge to genuinely care about a consumer journey when you’re strolling up to St Vincent’s at 9am for a daily dose of radiation.

So, thanks in no small part to a prophetically-timed insurance policy and coupled with my Zenith bosses and team displaying the patience of several weary saints, I took a full year off to have all the treatment and recover. In January 2016, I finally returned to work at Newcast. Within six weeks, and possibly to the surprise of absolutely no one, I’d resigned.

By June I’d left Sydney and in October 2016, I started studying for an M.A in Writing for the Stage and Broadcast Media at Dame Judi Dench’s old drama school in London and was the proud owner of a Student Railcard. Looking back now on these fairly life-changing decisions I was making on an almost daily basis, it’s probably less reflective of a mid-life crisis and more suggestive of a post-cancer epiphany.

Huddled at the root of these seemingly madcap decisions was the knowledge that I’d re-discovered a lifelong love of writing during my cancery sabbatical that I knew I couldn’t properly pursue if I got sucked back into full-time work. I couldn’t bear the idea of giving up the writing but the idea of walking away from a twenty-year career and a very pleasant salary and stepping into what was basically a gigantic abyss was slightly terrifying.

But cancer, for all its faults, does teach you many lessons if you’re so inclined to listen, not least that the fear of change is ultimately futile – it’s about taking a deep breath, getting your head down and cracking on. And when you’ve dodged a bullet, watched your eyelashes fall out, your hair grow back and lived to tell the tale, then it’s probably sensible to embrace the opportunity to make some little changes to your life.

For some, those changes might just be a cheeky tweak in lifestyle. For me, never one to do things by half, those changes were and have remained fairly monumental. Eighteen months on, after a year of drama school, countless student discounts, a spot of playwriting and the renting of a riverside country cottage, it’s now time to think about what comes next.

Over the last year, alongside the M.A, I’ve been doing a bit of work on the side with a few media businesses and clients in the U.K and Australia, helping them to write award entries, develop creative scripts, polish pitch documents and roll presentations in glitter. What I’m loving most about it is that I still get time to write what I want to write but I’m also dipping back into the industry I love to work on hugely different projects with smart people at my own pace and without the commitment of a full-time gig. And, as someone whose heart (and passport) is split between two hemispheres, this flexible way of working brings with it the very real possibility of spending time in both countries, ideally missing out on gloomy English winters forever! What’s not to love?!

So my advice is this; Don’t wait for the dreaded burn-out – it sounds, by all accounts, like something to avoid. Don’t wait for a life-changing event or illness to happen either – they are, I can confirm, also things to generally avoid. If you want to work more flexibly, then make it happen. Ask the question. Make some plans. Think about what you need. Pick the brains of some smart, like-minded types – you’ll find about 400 of them at Wyse Women.

Finally, and most importantly, always remember to hold the door open for pint-sized Irish rockers. Especially if they’re Bono.