the latest VICE magazine investigates Australia’s incarceration obsession, from the 35,467 people in Prisons across Australia (according to ABS Corrective Services) to Asylum seekers detained in Nauru. Head of communications at VICE ANZ Josh Gardiner chats with B&T about the latest edition of the mag.

The Incarceration Issue will include stories on the skyrocketing rates for Indigenous women, the reformative possibilities of prison architecture, prefab prison cells imported from China, Academy Award-winning director Eva Orner on her film about Australia’s refugee policy, an investigation into the disappearance of a maximum-security prison boss, a photo essay of prison creche art, Tas Pappas’s (from VICE‘s documentary All This Mayhem) prison workout and Yorta-Yorta man Briggs inside Reiby, a Juvenile Justice Centre on the outskirts of Sydney.

Why focus on incarceration in Australia?

We’re doing this because you can tell a lot about a country by looking at who it locks up and how it does that. Most people in custody are there because they’ve fallen foul of some kind of social issue; be it drugs, violence, Aboriginal disadvantage, immigration, poverty—basically all the biggest issues facing Australia. So by looking at incarceration, we’re actually taking a snapshot of how well or how poorly Australia is dealing with these issues. 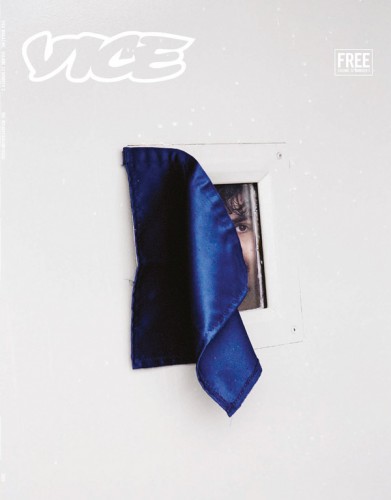 Will this be something VICE keeps investigating?The Incarceration Issue will be a one-off, but as it came off the back of a long period of coverage on the subject, imprisonment is something VICE will continue to follow. Our audience is passionate about injustice, and sadly there’s a bit of that going around our justice system. Do you think Australians lack empathy towards prisoners?We’re taught from a very young age that jail is where you go when you’re bad, so it’s not that surprising that there is a lack of empathy. But it goes to this unspoken role of incarceration, which is to lock things away where they don’t need to be thought about by the lucky majority on the outside. And that’s a great luxury but it doesn’t cut crime—we’re locking up record numbers of Australians. Does that mean we should be more empathetic? Well at the very least it means the status quo isn’t working.Do you feel like TV show depictions of prisons Orange Is The New Black, Wentworth, Prison Break trivialise the prison experience?Well, we’re entitled to be entertained, and I think people understand that the bulk of what makes it into TV dramas is just that: a dramatisation. But there’s something in the TV trope of an innocent person locked up in jail. Society seems very familiar with that idea and yet, as you said before, we don’t seem to care that much about all the non-criminals in Australian detention centres. Or the people in jail for things like the non-payment of fines.

How are you guys planning to market this issue? We’ve become well used to a large quantity of quality content here over the years so our team here have gotten pretty good at getting it out there. That said, there has definitely been a lot of extra effort put in to this one, with all the VICE in-house levers being pulled. The FODI (Festival Of Dangerous Ideas) panel is a wonderful opportunity to launch the issue in public, alongside a great program and guests of such repute. Once the magazine is on the street the focus will turn online where all the content will be mirrored and accompanied by a multi-part video series focusing on the indigenous experience of imprisonment. At that point we’ll be utilising media, socials and our editorial channels to share the edition far and wide.

Can you foresee any criticism towards the issue? We’re doing this to encourage discussion and debate around what we see as a crucial topic. Hopefully not all of that comes in the form of criticism but some of it inevitably will. At the end of the day we’re not trying to solve anything, we don’t have the answer. We’re just trying to tell powerful and respectful stories about what is clearly a flawed system.

Click here for the online version of VICE The Incarceration Issue.