The Ashes battle is well and truly underway out on the pitch, however, it appears to have escalated off it with a battle brewing between the two nation’s breakfast spreads.

At last week’s first Test in Edgbaston, Marmite was handing out jars of its salty black goo in an apparent attempt to convert Aussie spectators away from our beloved Vegemite.

Labelled “Marmy Army”, the brand plans to hand out the little jars for the full five Ashes Tests. 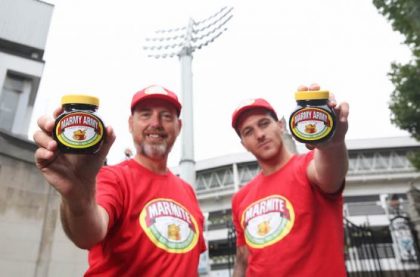 But Vegemite is having none of it, taking out full-page adverts in a UK newspaper to tear down its rival.

The work of Melbourne indie agency Thinkerbell, the series of ads read, among other things: “News has reached Down Under that free jars of Marmite are being handed out at The Ashes to prove it tastes better than our Vegemite. Are you guys barmy? Of course the refined English palate will prefer yours.” 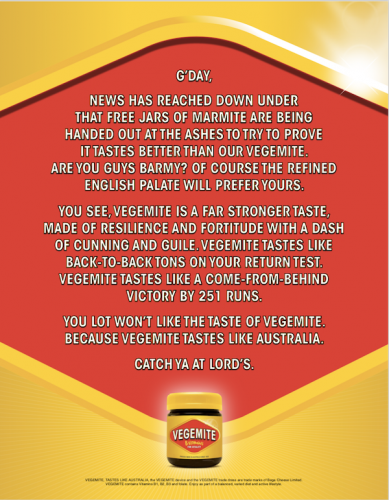 Commenting on the ads, Thinkerbell supremo Adam Ferrier told radio station 6PR: “We just want to show our support for Australia and sometimes it’s nice to pick a bit of a fight with somebody who isn’t your target market.”

Vegemite spokesperson Matt Gray added: “It’s not often we get brought into such a large scale international conflict. However, we found Marmite’s behaviour to be a little untoward. It’s just not cricket to give away Marmite at the cricket. We just want to set the record straight that Australians will always prefer Vegemite as Vegemite actually tastes like Australia. The English are welcome to their mild Marmite, it probably suits their sensitive palates a little more.”

Meanwhile, Camilla Williamson, brand manager at Marmite, weighed-in with: “At a time when we expect unprecedented amounts of fans of Marmite’s Australian counterpart to congregate in one place, we could not resist the opportunity to encourage Aussie’s to try the iconic taste of Britain’s favourite toast topper, Marmite.”

“We feel confident that our savoury spread is superior that we’re even hoping to convince Australian’s to switch up their current breakfast choices, making Marmite a staple in kitchen cupboards both for expat Aussie’s here and Down Under.”