The Department of Family and Community Services and VCCP have worked together to launch a new campaign to promote the 2016 NSW Seniors Festival.

Now in its 59th year, NSW Seniors Festival (formerly NSW Seniors Week) is the largest festival for seniors in the Southern Hemisphere, with over 300,000 people taking part in more than 1,000 free and discounted events.

Following a competitive pitch, VCCP were appointed to create a campaign that would promote and celebrate the calendar of events, large and small, across the state. Key events for this year’s NSW Seniors Festival include the Premier’s Gala Concerts, the Young at Heart Film Festival, the NSW Seniors Festival Expo and the 2016 Comedy Debate.

The NSW Government has also sponsored more than 200 organisations to host local events right across NSW. The challenge was to create a campaign that could encompass all of these different events as well as reflect the changing nature of what it means to be aged 60+ today.

The inspiration behind the festival is that no matter what your age, it’s never too late to grow – to learn, to laugh and to be inspired. This led to the campaign idea, ‘Grow Young’, a manifesto for the young at heart.

NSW Minister for Ageing John Ajaka talked about the Festival, which will be celebrated throughout NSW from 1 to 10 April.

“Each year, the NSW Seniors Festival inspires our seniors to try new things and engage with their community to express themselves and share their unique stories,” Ajaka said. “The 2016 theme Grow Young, is a reminder that no matter what your age, it’s never too late to learn and be inspired.”

The idea was brought to life by the 2016 NSW Seniors Festival ambassadors, who have shared their stories and experiences – and are featured across the 2016 campaign.

They worked together with VCCP, photographer Alexandrena Parker and FACS staff to create a unique range of film and imagery.

“Each of the ambassadors has a unique story to tell and their individual experiences will help create positive perceptions, while encouraging seniors to engage with their community and live life to the fullest,” Ajaka said. 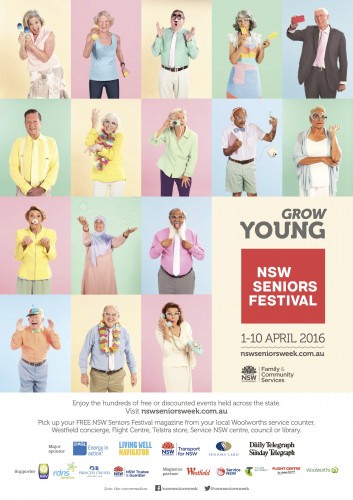 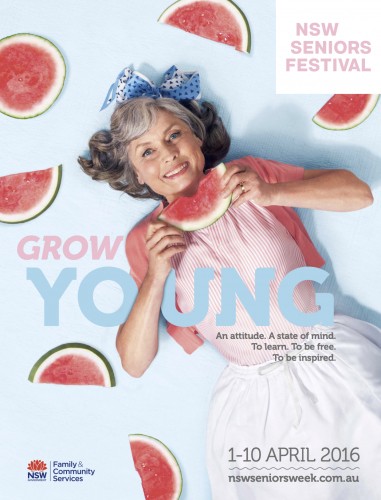