In news that will surprise no one, Kerri-Anne Kennerley has come out in defence of WHO magazine’s model mix-up, saying she’s been mistaken for 60 Minutes reporter Liz Hayes multiple times.

The celebrity and entertainment magazine came under fire for publishing an interview with South Sudan-born Aussie model Adut Akech alongside a photo of model Flavia Lazarus.

Though WHO blamed the blunder on an administrative error, Akech said the same mistake wouldn’t have happened to a white model.

However, on Studio 10 yesterday morning, Kennerley refuted Akech’s claims of racism, suggesting it was nothing more than a simple mistake.

She said: “I think [Akech’s] taking this way too far if she thinks it’s all about racism … somebody just made a mistake.”

Kennerley cited the many times she has been mistaken for Liz Hayes across different magazines.

“Was yours in just a social pages snap, opposed to an entire article about Adut, featuring on her success, the fact that she’s the face of Melbourne Fashion week and currently the hottest model in the world?” she asked. 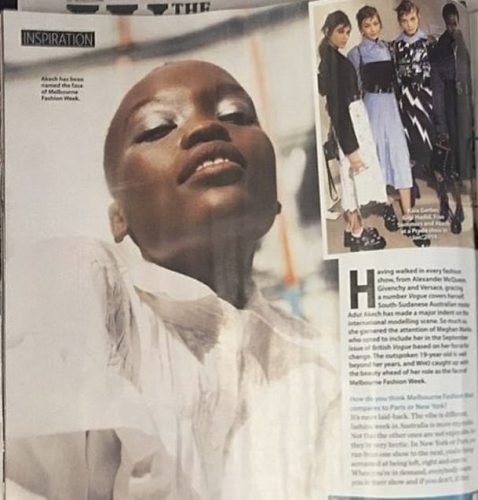 Ironically, Akech’s interview with WHO was around the issue of diversity in the fashion industry, while also discussing Akech’s views on refugees and her experience being raised in a Kenyan refugee camp.

Kennerley was unmoved, insisting it was an innocent mistake. Host Joe Hildebrand somewhat agreed with Kennerley, suggesting he did not believe the photo was an attack on an entire culture.

He said: “For me it’s a bit like Cate Blanchett having a go at the cameraman who takes a shot at her dress and saying how dare you, you sexist.”